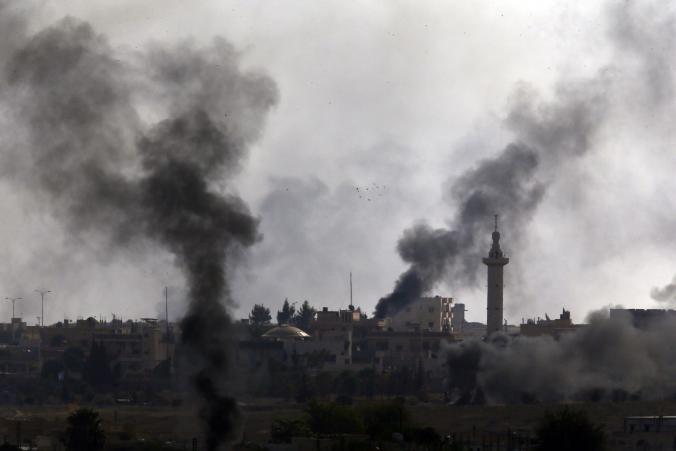 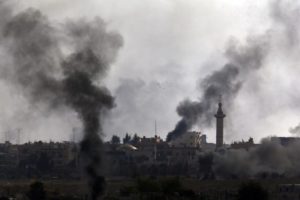 (Beirut) – The Turkish offensive in Northeast Syria points to urgent need for the Turkish Armed Forces, Kurdish-led forces, and all other local armed groups to make protecting civilians and respect for human rights a priority in their operations, Human Rights Watch said today.

Human rights priorities for Turkish forces and Kurdish-led forces, including the Syrian Democratic Forces (SDF) and the People’s Protection Units (YPG), should include taking all feasible precautions to avoid civilian casualties, investigating alleged unlawful strikes, and ensuring that civilians can flee the fighting in safety. All parties that effectively control areas in Northeast Syria should also provide sufficient support to displaced people and ensure that ground troops do not harass, arbitrarily arrest, or mistreat residents who choose to remain. The Turkish offensive has heightened concerns that those most responsible for war crimes or crimes against humanity could escape, including Islamic State (ISIS) members detained in Northeast Syria.

“Turkey and its allies have previously unlawfully killed, arbitrarily arrested, and wrongfully displaced civilians. This military operation risks repeating these abuses unless they take steps now,” said Kenneth Roth, Executive Director at Human Rights Watch. “Another key concern is that already inhumane conditions for tens of thousands of men, women, and children held in camps and makeshift prisons under the control of Kurdish-led forces could get even worse.”

At least 700,000 of the 1.7 million people in Northeast Syria need humanitarian assistance, according to the United Nations. While the extent of the Turkish military operation is not yet known, any major offensive is likely to displace thousands more people, straining a humanitarian response that is already at its limits, Human Rights Watch said.

Close to a half-million people have already been displaced in recent months by hostilities in Northwest Syria. The International Rescue Committee predicts that the new hostilities will displace 300,000 more immediately. Humanitarian groups have told Human Rights Watch that they have been unable to respond to the needs of the displaced and would be hard-pressed to mobilize sufficient resources to respond to any additional displacement.

Turkey had previously announced that it would create a 32-kilometer-wide safe zone in Northeast Syria in response to threats from the Democratic Union Party (PYD), a Kurdish-led authority in Northeast Syria that the Turkish government describes as a terrorist group. A second stated objective for the safe zone was to relocate there a million Syrian refugees who are in Turkey. However, an October 6 announcement by the US that it is withdrawing troops from Syria was seen by Turkey as greenlighting an offensive on the area, analysts said.

On October 9, news reports quoted a Turkish Security Directorate statement stating that criminal investigations had been initiated against 78 people for “spread[ing] black propaganda against our country regarding Operation Spring of Peace and inciting enmity and hatred, through unsourced and false social media postings intended to destroy the reputation of our security forces.”

The Birgun daily newpaper reported that its website director, Hakan Demir, was detained and released by an Istanbul court with an overseas travel ban pending an investigation. Diken news website reported that its editor, Fatih Gokhan Diler, was also detained.

“The Turkish military operation in Northeast Syria should not be used as a pretext to target democratically elected Kurdish mayors, politicians, and peaceful activists in Turkey itself,” Roth said. “Nor should Turkey target journalists and human rights defenders for critical reporting on the conduct of the military operation.”

Based on its experience in monitoring and documenting violations of human rights and international humanitarian law, Human Rights Watch highlights the following concerns and recommendations:

The Turkish Armed Forces should take all feasible measures to ensure the protection of civilians and civilian objects during military operations. This includes maintaining international standards and procedures designed to prevent civilian casualties, and robustly and transparently reporting airstrikes and enemy and civilian casualties.

This also requires promptly, impartially, and thoroughly investigating instances in which civilian casualties may occur as a result of those operations; and providing compensation for wrongful civilian deaths and injuries and appropriate “condolence” or ex gratia payments for civilian harm.

The laws of war strictly prohibit attacks targeting civilians or civilian structures unless they were being used for military purposes, and they prohibit indiscriminate attacks which fail to distinguish between military and civilian targets. Attacks must also be proportionate, meaning that any anticipated civilian casualties or damage to civilian buildings should not be excessive in light of the concrete military advantage anticipated.

Human Rights Watch has previously documented efforts by all parties to the conflict to block Syrians from fleeing the violence. Turkish border guards have shot at and blocked Syrians attempting to flee violence in other areas of Syria and deported Syrians from Istanbul and other provinces back to areas where hostilities are ongoing.

The Syrian government had also blocked civilians fleeing the Turkish-led military actions in Afrin in 2018 from entering territory under government control, while the armed groups allied with the Democratic Union Party (PYD) had prevented civilians from fleeing and forced them to remain in areas where active hostilities occurred.

Iraq’s semi-autonomous Kurdistan Regional Government (KRG), which has closed its border with Syria to fleeing refugees in the past, should respect the customary international refugee law and international human rights law principle of non-refoulement. That requires them not to push back anyone fleeing threats to their life or freedom or anyone who faces a serious risk of torture or other cruel, inhumane, or degrading treatment or punishment.

The laws of war require all parties to the conflict to take all feasible steps to evacuate civilians from areas of fighting or where fighters are deployed and not block or impede the evacuation of those wishing to leave.

Turkey should vet armed groups before assisting them, and monitor their compliance with international humanitarian law, and make clear to them that looting, arbitrary arrests, and mistreatment are unlawful. Turkey should also investigate any credible allegations of abuses by groups on the ground.

Turkey has condemned looting by its allies but has not addressed any other abuses by the armed groups it backs or held them accountable. Turkey is equally responsible for the violations committed by its allies on the ground.

Human Rights Watch has documented that Turkey-backed armed groups in the Free Syrian Army (FSA) have seized, looted, and destroyed the property of Kurdish civilians in the Afrin district of northern Syria. The groups also had taken over residents’ homes and destroyed and looted civilian properties without compensating the owners.

Local activists have also reported hundreds of incidents of abuse by Turkish-backed factions that amount to unlawful arrests, torture, and disappearances. The UN Commission of Inquiry on Syria found that arbitrary arrests, detention, and pillaging became pervasive throughout Afrin.

Use of Child Soldiers

Despite pledges to stop the practice, the YPG has recruited children, including girls, and used some in hostilities. The YPG should immediately demobilize children in its ranks and stop recruiting children.

International law prohibits non-state armed groups from recruiting anyone under 18, and enlisting children under 15 is a war crime.

Any authority with effective control over the prison facilities should ensure that detained ISIS suspects are afforded due process and fair trial rights and protected from reprisals and indiscriminate attacks, and that they are kept in prisons equipped for them in line with international best standards. No one should be detained without a legal basis or when detention conditions would amount to cruel, inhumane, or degrading treatment.

If Turkey’s ground offensive proceeds, the government should secure any detention facilities that come under its effective control and protect the detainees. It should also make sure that those responsible for war crimes and crimes against humanity are held accountable.

Northeast Syria was also the site of major offensives by the US-led coalition against the Islamic State (ISIS), which resulted in the deaths and displacement of thousands of people, as well as the destruction of essential infrastructure.

Almost 100,000 women and young children are locked in squalid camps for suspected ISIS family members with insufficient clean water or health care. In addition to Syrians and Iraqis, the detainees in makeshift prisons and camps include men, women, and children from about four dozen other nationalities.

Nearly 340 children died in al-Hol, the largest of the camps, between December and September, according to the International Rescue Committee, most from preventable diseases such as severe diarrhea and malnutrition. Most were under age 5.

On September 30, Medecins San Frontieres reported that at least one female camp detainee was killed and at least three others were wounded when security authorities responded with gunfire to an alleged protest by camp residents. Since then, all medical services have been closed in the al-Hol annex, which holds about 11,000 non-Iraqi foreigners, according to aid workers and detained women.

About 11,000 men and boys as young as 12 suspected of ISIS membership have remained detained in makeshift prisons for months without charge in severely overcrowded prisons under the control of the SDF.

ISIS subjected people under its control to severe restrictions and punishments including executions of allegedly gay men and stoning people for alleged adultery. ISIS destroyed religious and archaeological sites throughout areas under its control and looted and stole valuable cultural artifacts to help finance its operations.

On October 10, US President Donald Trump tweeted that the US had transferred two high-value British detainees known as the “Beatles” to “a secure location controlled by the US.” The US also reportedly took custody of 38 other high-value prisoners for transfer outside of Northeast Syria. The US should ensure that all prisoners it transfers do not face the risk of torture and can challenge their transfer. For prisoners from the UK and other countries that have abolished the death penalty, such transfers should not take place without effective assurances that the prisoners will not face capital punishment should they be convicted in US federal courts.

Countries whose nationals are held in prisons and camps for ISIS suspects and family members should urgently assist their citizens who want to return home for rehabilitation, reintegration, and, if appropriate, prosecution in line with international standards, or evacuation to third countries where they are not at risk of torture and other inhumane treatment.

In the course of the military incursion on Northeast Syria, Turkey should refrain from arbitrarily targeting Kurdish political activists, politicians, journalists, and dissenting voices in Turkey.

After Turkey’s January 2018 military incursion into the north Syrian district of Afrin, the Turkish authorities detained and prosecuted hundreds of people for social media postsadvocating peace and criticizing the operation.

Turkey’s military incursion into Northeast Syria comes at a time when the Turkish authorities have targeted democratically elected mayors from the pro-Kurdish opposition Peoples’ Democratic Party (HDP). In August, the Interior Ministry removed from office mayors of three major municipalities of the mainly Kurdish southeast and eastern regions of Turkey and dissolved their local councils, blatantly violating the rights of voters and suspending local democracy in those municipalities. Further detentions of Kurdish political activists and HDP officials followed.