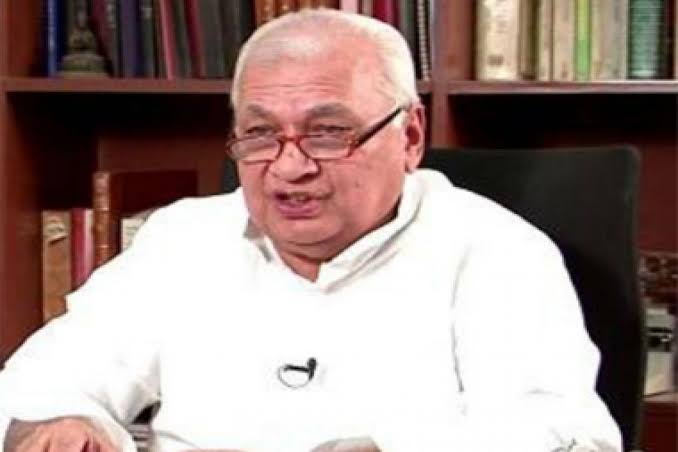 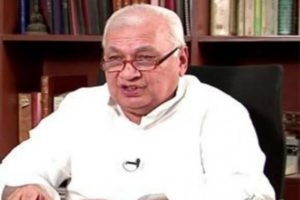 Newly-appointed Kerala governor, Arif Mohammad Khan, was the youngest cabinet minister in the Rajiv Gandhi government (he was 30 when he took oath in 1981) but resigned after he had differences with the then prime minister over the triple talaq legislation. Today, the Bharatiya Janata Party’s abolition of triple talaq in Parliament is reflective of his long-drawn ideological battle against the practice. A section of civil society dismisses Arif Mohammad Khan as a friend of the Hindutvavadis who has helped the BJP expose cracks in the secular façade of the Congress party.

A month after being re-elected as the prime minister, Narendra Modi read out a remark made by someone in the Congress: “One of the former Congress ministers (in the Rajiv Gandhi-led government) made a very shocking statement recently. He said other Congress ministers had remarked that it was not the job of the Congress to reform Muslims. ‘If they want to lie in the gutter let them be,’ is what the leader said.” In a 2017 interview to IndiaSpend, Arif Mohammad Khan had made the exact same statement. On being appointed the governor, he has been officially established as a political insider. Unabashedly, the 68-year-old Arif Mohammad Khan condemns the Muslim League hangover that has resulted in community-specific political representation.

When the Supreme Court declared triple talaq unconstitutional in 2017, women’s rights activist and former member of the Planning Commission of India Syeda Saiyidain Hameed had told Firstpost: “In West Asian countries and in Pakistan, women had pointed out to me that this law is regressive. India is finally on par with them. Back in the 1980s, the Rajiv Gandhi government was trying to win over a certain segment of Muslim votes and that was an expedient move.”

Speaking to Firstpost, even 94-year-old Islamic scholar Maulana Wahiddudin Khan had explained that “In Quran, the prescribed method is that the man says talaq in the first month, talaq in the second month and then in the third month, he either says talaq yet again or says that he’s ready to retract his statement. This is done to ensure that divorce isn’t happening in a fit of rage and anger. During this period, anger and confusions are expected to disperse.” Many voices echo that of Arif Mohammad Khan’s but the latter’s opinions have only been viewed in the context of his changing political affiliations.

To decode the row, Arif Mohammad Khan shared the story of a riot that took place in Moradabad. On 13 August, 1980, on the day of Eid, a pig strayed into the Idgah where 50,000 were praying. The policeman on duty refused to take the pig away and that resulted in a heated argument which quickly snowballed and additional director general of police DP Singh was dragged into the violence and was later found dead. The police opened fire and more than 50 lost their lives.

“The incident pained us all but some Congress MPs called a meeting of all Muslim MPs from different parties. There were three meetings that were well attended. This gave the message that only Muslims were concerned about Muslim rights and safety and others weren’t bothered about Muslims,” said Arif Mohammad Khan adding that the sense of isolation is planted in the minds of a community by those who claim to be sole custodians of the rights of that community.

“I had addressed a letter to the co-convenor of the meetings stating that the incident must be condemned but not projected as a Muslim issue. This was a collapse of the law and order,” he said and that the late Syed Shahabuddin, Indian Foreign Service bureaucrat turned politician emerged as the spokesperson of that group of 37 to 38 Muslim leaders. He stated that Shahabuddin could articulate well and could reach out to the press. “On three different occasions, he (Shahabuddin) gave a call to boycott Independence Day and Republic Day celebrations. He would give the call for boycott four-five days in advance and withdraw the call on the eve of the event,” the former cabinet minister said. In Arif Mohammad Khan’s opinion, identity politics like this aimed to alienate Muslims from their Indianness. Like untouchability, even separate electorates were abolished but Arif Mohammad Khan feels that it is unfortunate that both still exist in this country.

“It is the underclass that suffers the wrath of communal violence, not Congress and other secular parties who perpetuate the mindset of separatism through their politics,” said the Kerala governor-designate. Arif Mohammad Khan felt ‘minority psychosis’ debilitates a community, making it insecure about its own incapability to thrive. Muslims are not a monolithic entity. Then, what the proverbial ‘Muslim voice’ claims to represent is itself questionable. “There are four major schools of jurisprudence and almost equal number of jurisprudence among Shias and there are sects who don’t have a jurisprudence,” he explained that the politics of religion and appeasement has homogenised a diverse community to its disadvantage.

A former member of the Congress Party, Arif Mohammad Khan shared with Firstpost that he has a problem with the comments some of the party leaders made in Parliament after the abrogation of Article 370 in Jammu and Kashmir. “They have even gone against what Pandit ji and Indira ji have said. In 1960, Pandit ji had told a reporter of The Guardianthat if we allow Kashmir to go away to Pakistan, Indians will start believing that Muslims are Muslims first and Indians later. He had said that we owe it to the welfare of the Muslims to not allow another partition of the country on religious lines,” he said asking if the current crop of Congress leaders has read this or if they know that Article 370 has been diluted over the years due to repeated imposition of President’s Rule.

The eighth spell of Governor’s Rule in the state began after Chief Minister Mehbooba Mufti resigned in June 2018. In his book Constitutional Law of India, HM Seervai pointed out that it is only after the Congress party’s defeat in the 1967 elections and the rise of independents led to problems in the exercise of power by the governor. “As the President acts on the advice of his Ministry, it may be contended that if the Governor takes action contrary to the policy of the Union Ministry, he would risk being removed from his post as Governor and therefore, he is likely to follow the advice of the Union Ministry.” Those who are crying hoarse about the death of democracy and people’s will are forgetting how much they damaged it through increased central control.

Arif Mohammad Khan proudly shared that he used to win from a constituency named Bahraich in Uttar Pradesh which had over 80 percent Hindu voters and he defeated a Hindu opponent to be elected to the Parliament. “How am I a minority?” he asked and shared a story of his trip to Pakistan in 1998 along with a delegation of members of Parliament a week before Atal Bihari Vajpayee launched the Delhi-Lahore Bus service. From Nawaz Sharif to a kulfi seller on the streets of Lahore, people in Pakistan had told him that they watch him speak on TV. He feels that those who are made conscious of their otherness, of the threat constantly looming over their identity, are more likely to remain estranged.

Arif Mohammad Khan has fought orthodoxy throughout his political career and that has come at a cost.

“In India, the Muslim League hangover is persistent and anybody who isn’t aligned to the sole body claiming to represent Muslim rights is charged with being bought by the infidels,” the Kerala governor-designate said. He cited the example of Maulana Abul Kamal Azad’s reputation of being dismissed as a ‘show boy’ for his progressive views didn’t match that of the clergy.

“Maulana Azad was a man of vision, whereas Jinnah had a myopic view. He (the latter) couldn’t even envisage the impact of the vitriolic language he was inserting into the subcontinent’s body politic,” said Arif Mohammad Khan, feeling that India has unfairly evaluated the Muslim scholar who is posthumously among the highest-selling authors in modern-day Pakistan. M Raza Pirbhai’s biography of Fatima Jinnah mentions that in the aftermath of the partition, Jinnah would raise the paper on the dining table to hide his tears.

In Syeda Saiyidain Hameed’s biography of Maulana Azad, the epitome of India’s Ganga Jamuni syncretism, one quote of Maulana Azad stands out: “The perpetrators of oppression have always availed of the services of the ulema who are more than willing to serve the state…. ”

In Arif Mohammad Khan’s opinion, the ignorance of the subcontinent’s cultural history is often visible in its politics. “After the creation of Bangladesh, Pakistan became bitter and in the tensions leading up to the 1971 war, they made statements like ‘Yeh aloo khaane waale humse lad rahe hain’. They fail to understand that India became vegetarian at a much later stage and initially was a pastoral society; the ethos of Indian society is not revolution but evolution.”

He explained that Pathans were Vedic tribes and the Rigveda describes them as ‘Paktha’ and the Sanskrit grammarian Panini was one of them. India could have benefited from embracing its composite culture instead of playing politics over it. Indonesians are Muslims but have Garuda in their airline, Ganesh on their currency and a Krishna-Arjun samvaad statue outside their presidential building. Indonesia is twice as small and its tourism revenue touched $14,117 million in December 2017. In 2018, the country witnessed a nearly 40 percent rise in Indian tourists.

He also cited the example of Iran, which was conquered by the Arabs in the first century and it took more than 200 years for the culture to embrace Islam. “Iran doggedly clung onto its own culture and even today, there is a nine-day holiday for pre-Islamic festival Navroz and one day holiday for Eid,” he shared that culture and religion are separate and strongly believes that politics has blurred the lines between the two. “Today, Muslims unknowingly adopt Iranian names because knowledge of cultural history is poor.”

Today, in a typical Madrasa, a child studies from the age of 8 to 21 and leaves with a certificate. Employability in the formal sector is nearly impossible.

Arshad Shaikh runs the Today’s Kalam Foundation that has undertaken the responsibility to modernise 400 madrasas with computers and maths. Based in Old Hyderabad, Shaikh said Asaduddin Owaisi’s All India Majlis-e-Ittehadul Muslimeen is the only party that has influence in the area. “Our neighbourhood is far less developed compared to the rest of Hyderabad that has exposure to technology and education. It took me two years to convince 20 madrasas to modernise because religious heads don’t want to mainstream our education system,” Arshad said. Arif Mohammad Khan listened to Arshad’s story and wondered how leaders who pretend to be custodians of Muslim rights are benefiting people.

At 42.7 percent, Muslims have the highest percentage of illiterates, while Jains, at 86.4 percent, have the highest percentage of literates, according to Census 2011 data. The NSSO’s 68th round (2011-12) provides estimates of education levels and job market indicators across major religious communities in India. The educational attainment of Muslims is the least among all these communities. In urban areas, the number of male Muslim postgraduates is as low as 15 per 1,000. The figure is four times lower than that of Hindus, Christians and Sikhs.

Soon after Prime Minister Narendra Modi pitched for smaller families to combat population explosion in the country in his Independence Day speech, Owaisi termed his take as ‘discarded’ and ‘intrusive’. Arif Mohammad Khan’s only response to this is that people become enemies of what they don’t understand.