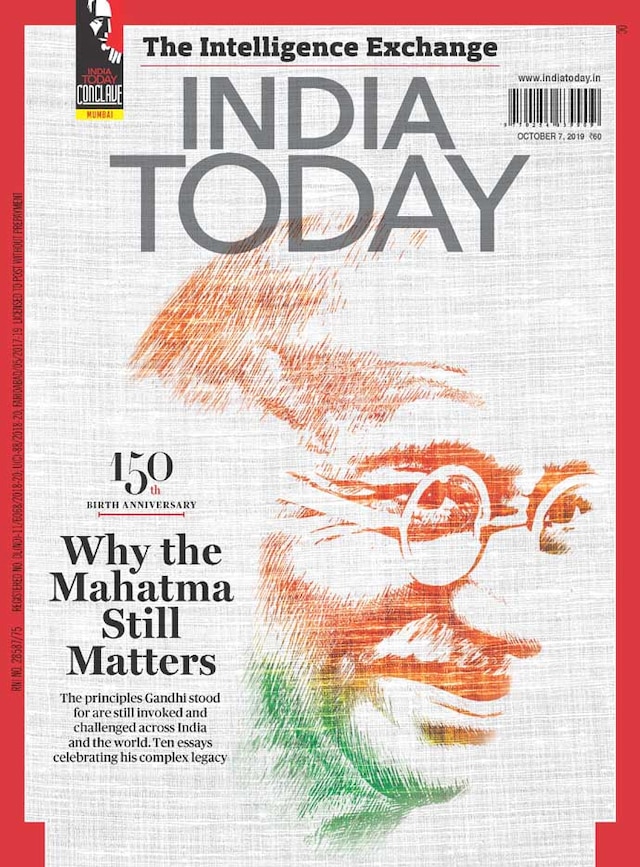 Introducing Prime Minister Narendra Modi at the recent diaspora event in Houston, Texas, where Vaishnava Jana To was sung in a medley with Amazing Grace, a US Congressman quoted Mahatma Gandhi and his definition of democracy — ‘something that gives the weak the same chance as the strong.’ The invocation of the Mahatma at the spectacle designed to felicitate the Indian PM was subliminal — Gandhi was among the first 20th century Indians to be known outside his country.

Long before the unknown Chinese citizen blocking the path of a tank column in Tiananmen Square, there was Mohandas Karamchand Gandhi — the cosmopolitan internationalist-turned-native nationalist, the ‘seditious Middle Temple lawyer now posing as a half-naked fakir’, as Winston Churchill once sputtered contemptuously — standing up to one of the world’s greatest imperial powers. India’s independence in 1947 came largely through Gandhi’s insistence on peaceful, non-violent ‘satyagraha’. Leaders of globally oppressed peoples chose his path. From Martin Luther King Jr, one of the leading lights of the US Civil Rights Movement in the 1960s, to Nelson Mandela who fought for the dismantling of apartheid, the last great tool of institutionalised colonial oppression, in 1994, they all saw Gandhi as a role model. His name and likeness are everywhere — from countless busts, at least one road in every Indian city and all Indian banknotes — the Father of the Nation occupies a sacred pedestal in our collective consciousness. Gandhi was a multi-faceted personality — curious, insightful, spartan, possessed of enormous self-belief, one of the world’s greatest mass mobilisers and certainly one of the greatest Indians who has ever lived. His views on everything, from diet, communal amity, abstinence, untouchability, cleanliness to the economy, are well known. But what relevance do the views of a leader who lived over 70 years ago in an impoverished, pre-industrial nation with a population of just over 300 million have in a rising economy with over 1.3 billion people?

On his 150th birth anniversary, our special issue, ‘Why the Mahatma Still Matters’, curated by Managing Editor Kai Friese, attempts to answer this. Ten distinguished writers put the Mahatma under the scanner to tell us why he indeed matters, perhaps more now than ever before. If British Labour MP Bhikhu Parekh examines Gandhi’s legacy, historian Faisal Devji excavates criticism of him in the light of modern movements such as feminism, anti-casteism and racism. There is Ram Bahadur Rai examining the Sangh Parivar’s changing attitudes and relationship with Gandhi and Apoorvanand looking at the Hindutvist attempt to appropriate him.

Art historian Jyotindra Jain presents the rise of Gandhi and the rise of nationalism through vignettes from his collection of Gandhi-themed vintage print art. Venu Madhav Govindu of the IISc, Bengaluru, dwells on why Gandhi’s ideas belong not just to his time but to the ages, while Gandhi scholar Tridip Suhrud outlines the Mahatma’s importance as an advocate for the poor and the disenfranchised. Carnegie Mellon professor Nico Slate sheds light on Gandhi the vegetarian campaigner, as a precursor of and model for modern ‘ethical lifestyles’, while journalist Sopan Joshi elaborates on the challenges of writing textbooks on Gandhi for the schoolchildren of today. The Mahatma matters in several ways. For, as his grandson, the scholar Rajmohan Gandhi, says, ‘In our world’s post-truth phase where a Donald Trump grabs the headlines, threatened minorities receive the rough end of the stick and threats to the planet are ignored, a Gandhi who has been dead for 70-plus years frequently pops up as a reassuring symbol, the pro-truth defender of the rights of minorities and of our planet, smilingly spinning his thread on a wheel.’

There are three elements of a great legacy — the good deeds the person has done, the charity people do in his name and the knowledge he leaves behind for others to benefit from. Mohandas Karamchand Gandhi scores on all three counts.

(India Today Editor-in-Chief’s note for the cover story, Why the Mahatma still matters, for October 7, 2019.)