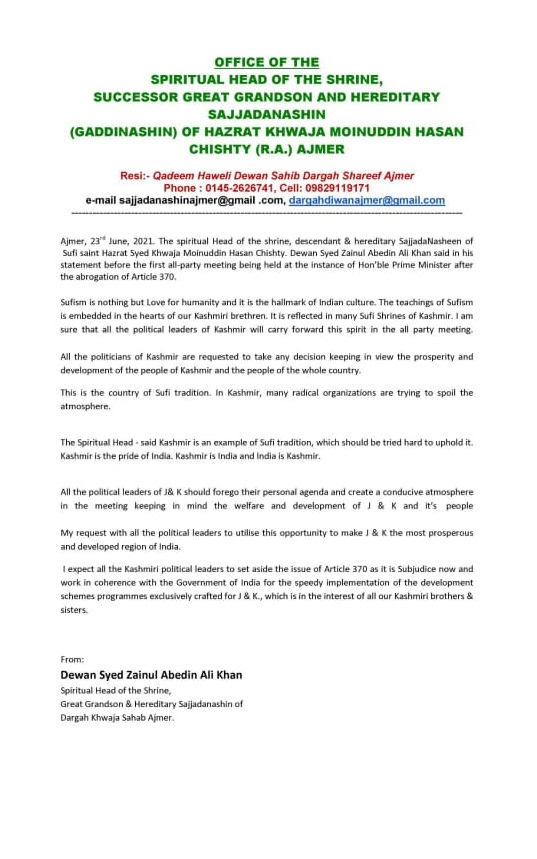 Facebook
Twitter
Pinterest
WhatsApp
Click TV Special
Here’s the first outreach initiative from the Centre since the abrigation of Article 370 and bifurcation of the region into two Union Territories: Jammu and Kashmir and Ladakh. India’s Prime Minister has called a meeting of Jammu and Kashmir leaders in New Delhi to strengthen political process in the Union Territory.
The Centre has invited mainstream politicians of Jammu and Kashmir for a meeting in Delhi. The meeting will be chaired by Prime Minister Narendra Modi.
The Centre has invited 14 leaders of mainstream political parties for Thursday’s meeting. These included four former chief ministers – NC leaders Farooq Abdullah and his son Omar, PDP chief Mehbooba Mufti, and senior Congress leaders Ghulam Nabi Azad.
Apart from these leaders, Congress’ Tara Chand and GA Mir; J-K Apni Party’s Altaf Bukhari; BJP’s Ravinder Raina, Nirmal Singh and Kavinder Gupta; CPI(M)’s Mohammed Yousuf Tarigami; National Panthers Party’s Prof Bheem Singh; and Peoples Conference’s Sajad Gani Lone were also invited to the meeting.
Though official agenda was not set for the meeting, leaders from Jammu and Kashmir have indicated that they will press for restoration of Article 370 and full statehood. Besides, discussions on delimitation and assembly elections are also expected to take place at today’s all-party meeting.
The all-party meeting signals the restarting of political engagement between mainstream Kashmiri parties and the Centre, which in August 2019 voided Articles 370 and 35A that bestowed special status to Jammu and Kashmir and privileges to its residents, and split the state into two Union territories.
The meeting, though first between the leaders from Jammu and Kashmir and the Centre since the August 2019 developments, drew lukewarm reactions in the Muslim-majority Kashmir valley. Here, limited trust in mainstream parties and hostility over the revocation of Article 370, which granted Jammu and Kashmir special status, persisted among residents.
Politicians in the Valley remain bitterly opposed to J&K’s bifurcation and revocation of Article 370.
Dargah Ajmer Sharif Diwan Syed Zainul Abedin Ali Khan has rightly suggested in his comment on the all-party meet on J&K:
“I expect all the Kashmiri political leaders to set aside the issue of Article 370 as it is subjudice now and work in coherence with the Government of India for the speedy implementation of the development schemes programmes exclusively crafted for J&K”