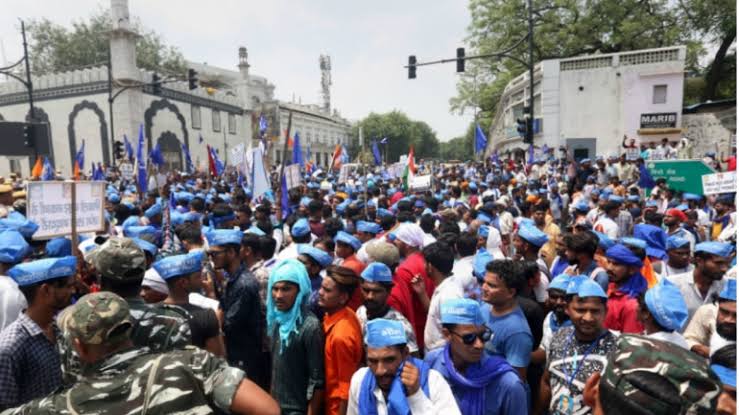 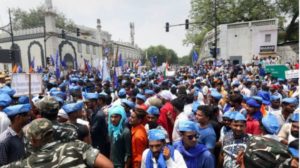 Representatives of several Muslim organizations supported the Dalit community’s demand for reconstructing a Ravidas temple in Tuglakabad forest area. They also said that they would organise a joint protest in Delhi on September 15.

Representatives of several Muslim organizations on Monday supported the Dalit community’s demand for reconstructing a Ravidas temple in Tuglakabad forest area and said they would organize a joint protest in the national capital on September 15.

The Delhi Development Authority (DDA) had demolished the temple on August 10 on the orders of the Supreme Court.

On August 21, a massive protest in the national capital on the issue turned violent, following which Dalit group Bhim Army chief Chandrashekhar Azad and 95 others were arrested on the charge of rioting.

At a press conference here, Mulana Fazlul Manan Shahi, the Imam of Teele Wali Masjid in Lucknow, said, “We feel the pain caused by the temple’s demolition as we have gone through a similar experience. We share the grief of our Dalit brothers. We will be there to rebuild the temple.”

Mufti Aeyaaz Arshad Qasmi, a member of the All India Muslim Personal Law Board, said, “If the government does not rebuild the temple, we will hit the streets on September 15. We will do all that we can. We will take legal recourse too.”

Syed Bahadur Abbas Naqvi, the general secretary of Anjuman-e-Haideri, alleged that the “government misled the apex court by furnishing fake documents about the acquisition of the land where the temple stood.”

“According to law, land belonging to any religious structure cannot be acquired. The government acquired the land in question in 1986. There is enough evidence to prove that the temple existed before 1986,” he claimed.

“Muslims and Dalits communities stand together on the issue. We demand the temple be built at its original place and Azad and his supporters, who have been arrested on false charges, be released immediately,” Naqvi said, adding on September 15, the Muslim community will take put a peaceful march to the site in Tughlakabad where the temple stood.