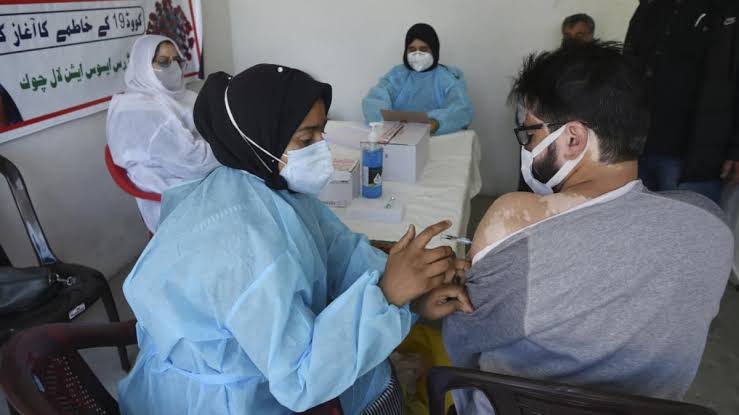 In the Union Territory of Jammu & Kashmir, a remote hamlet in Bandipora district has become the first village in India to vaccinate all its adult population against COVID-19….

Religious leaders were brought in to help raise awareness, especially during the holy month of Ramadan. While initially the hesitation of the vaccine was a matter of concern among the people, it has now been overcome, officials say. “Mosque committees and Waqf board have greatly helped in creating awareness and removing hesitation for religious reasons”……..

The credit, first and foremost, goes to the healthcare workers whose strenuous efforts shot Weyan hamlet, with an adult population of 362, to national fame, they said. “The village is located only 28 kilometres away from Bandipora district headquarters, but a distance of 18 kilometres has to be covered by foot as there is no motorable road,” an official of the health department said.

He said the task of vaccinating all the residents was even more difficult as the village consists of nomadic families who go to higher reaches for grazing their livestock. “There is no internet access in the village. So it was not possible for the residents to get appointments for vaccination like the way people in urban areas do,” Bashir Ahmed Khan, Chief Medical Officer, Bandipora said while explaining the difficulty faced by the healthcare workers.

The vaccination in the village was covered under ‘J&K model’, which is a 10-point strategy to vaccinate the entire eligible population at an accelerated pace. Despite initial vaccine hesitancy, Jammu and Kashmir has achieved 70 per cent vaccination in the 45+ age group, almost double the national average, the official said.

How many people have been vaccinated so far?

What are hurdles, which places are highly vaccinated, which area not?

Shopian district has been a success story this year in terms of vaccination and control of the spread of COVID-19. Some villages in this district were badly affected by the first wave of the pandemic in 2020.

A village named Hirpora in Shopian was termed as the hotspot of entire south Kashmir as over 80 people tested positive in it. However, this year Hirpora has been one of the first villages to get 100% vaccine shots for people above 45 years.

The district Ganderbal has become the second district in Kashmir division to achieve the cent percent vaccination target of all above 45 age group with at least the first dose of Covid-19 inoculation.

Deputy Commissioner (DC) Ganderbal, Krittika Jyotsnasaid that achieving the target of vaccinating all above 45 age group is a big achievement for which she complemented the health care workers, PRIs besides other front line workers who have visited door to door to counsel people about the need of vaccination.

While elaborating on arrangements put in place for achieving vaccination targets, she said that over 68440 persons over 45 years of age are given their first dose in the district. She said that 94 vaccination sites were established to achieve the target adding that all these sites are still active.

Jammu district was the first district to achieve the target of 100% vaccination of its population above 45. Officials say that several factors worked in this district. “One of the biggest factors was less hesitation towards vaccines.

People were desperate to take jobs. Management of logistics and availability of vaccines were the major factors that helped us achieve the target,” said a senior health official.

In Jammu division, district Samba has also almost achieved its target of immunizing beneficiaries in the age group of 45 years with at least the first dose of vaccines. This achievement is significant as the district is geographically vast and stretches along the international border, making access and execution a challenging task.

How are they reaching out to people?

Health workers from different parts of Kashmir valley visited farm sites in the district to vaccinate the farmers working in the fields, especially in the paddy fields. In Jammu & Kashmir’s Anantnag district administration starts COVID vaccination drive for nomadic communities. Vaccination sites have been increased in all 20 districts. Door-to-door immunization has already started to cover old, infirm and physically challenged citizens.

Over 33.41 lakh people in Jammu and Kashmir have been given the first dose of the covid vaccine. These include frontline workers, health care workers, senior citizens above 60 years and citizens above 45 years of age. At present, Jammu and Kashmir is second only to Kerala in the nationwide vaccination list. At the same time, 2.57 lakh people in the age group of 18-44 have already taken the first dose, while 48 lakh people are yet to be vaccinated.

How are they convincing people?

In the Union Territory of Jammu & Kashmir, religious leaders were brought in to help raise awareness, especially during the Islamic holy month of Ramadan. While initially the hesitation of the vaccine was a matter of concern among the people, it has now been overcome, officials say.

“Mosque committees and Waqf board which make announcements during the daily prayers as well as during the Friday prayers helped a lot in creating awareness and removing hesitation for religious reasons,” said Sachin Kumar Vaishya, District Magistrate, Shopian.