Home CRITICLES Palestine vs Kashmir: Pakistan rides on the Palestine issue to their advantage 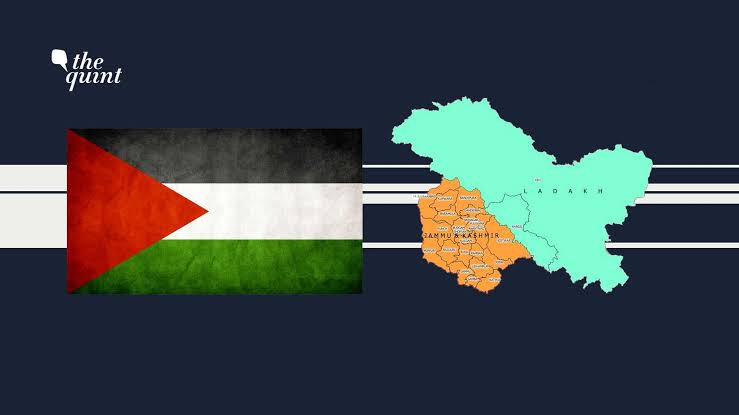 In Kashmir and elsewhere, the plight of Palestinians is suddenly being talked, written about, and even sung along with the Kashmir issue.

In all the noise of the blame game over the handling of the Covid-19 pandemic, some interesting developments have gone entirely unnoticed. True, the sudden flaring up of the Palestine issue did take up media space and lead to angry reactions. But what went under the radar was that in Kashmir and other parts of the world, the plight of Palestinians was suddenly being talked and written about, and even sung along with the Kashmir issue, in protests, webinars and overwhelmingly on social media. While the underlying theme was meant to highlight the plight of Muslims, none of these platforms mentioned the prosecution of Muslims in China’s Xinjiang or their killing by the Taliban. That, in itself, is a clue. But it’s not the whole story.

In May, the Valley saw violent anti-Israel protests at a time when strict pandemic restrictions were in place. It led to arrests, including of a cleric from Shopian, who had made a fiery speech on Palestine at a gathering on the eve of Eid, which went viral. The result? Violence, arrests and crowds on the street, all of which was covered eagerly by social media influencers. Most of those arrested were released a day later, which of course was ignored.

But the recent protests are curious for several reasons. Kashmiris have been backing the Palestine cause for years, with some of the worst violence during the 2014 Gaza crisis, when Palestinian flags were flown on vehicles and shops in Srinagar in a gesture of solidarity. But the fact is that support to the Palestinian cause has increased significantly under the Narendra Modi government, with the first ever prime ministerial visit to Palestine taking place in February 2018. Here’s another fact. Palestinians themselves have never protested for Kashmir on the ground. Or in support of India either even though the Palestinian Authority expects Delhi’s support. So, the conflation of Kashmir and Palestine is certainly not originating in Gaza.

Take a look at who’s covering this story. One prominent source is the Turkish Anadolu Agency, which regularly publishes articles linking Palestine to Kashmir. Ankara is known to be on the same page as Islamabad on this, but interestingly, Islamabad’s English media is far more discerning. It is now being punished severely for its independence. Then there is the Qatari mouthpiece, Al Jazeera, which apart from coverage of “Indian Administered Kashmir” also publishes the Palestine twinning aspect. This, in turn, is viewed through the lens of scholarship by experts, for instance at the University of Warwick, who while apparently examining post-colonial states, also do an extremely one-sided analysis of Kashmir, Hindutva and ‘post secularism’.

Higher in the pecking order are posts on the institute of one of the top universities, UC Berkeley, which pushes the Palestine-Kashmir linkage. Then there is the Kashmir scholars network working on the same lines, though it doesn’t offer any details on its website. There is, however, a letter from the body, to the United Nations General Assembly urging it to not give India a seat on the UN Security Council. It is signed by a group of academics from across the US, and obviously from the Quaid-i-Azam University in Pakistan. It naturally doesn’t mention Pakistan’s completely illegal – by its own laws – occupation of Gilgit Baltistan and so-called ‘Azad Kashmir’. This is just the tip of the iceberg. The whole is backed and encouraged by another set of actors.

ORGANISATIONS THAT TURN THE TABLE

For some time, groups formerly focused only on Palestine have turned their attention to Kashmir. A group named American Muslims for Palestine made its voice heard on the Article 370 issue. Research outlines other ties, particularly between the shadowy Stand With Kashmir and groups like Students for Justice in Palestine, now out in strength in a vigil against Israeli actions, in twinning Kashmir with Palestine. SWK also supported a solidarity march for Palestine on 29 May by the Council for American Islamic Relations, a group that aims to fight Islamophobia in the US. Yet another is the Majlis Ash Shura, an umbrella organisation of nearly a hundred mosques and other outfits that organises webinars where the audience is urged to see Kashmir in the same way they view Palestine.

A central role in much of this is by the ICNA (Islamic Circle of North America), which has long aspired to lead the dialogue on Kashmir in the US. It is now shown to be supportive of the Jamaat -i-Islami, a group that propagates and encourages violence in the Valley, and is closely associated with Pakistani intelligence, not to mention terror groups in Kashmir. The ICNA, with its million dollar purse, now brackets not only Palestine and Kashmir but also the Black Lives Matter movement, thus powerfully building up its base in the US. Backed by a deep purse (with funds pouring in online as this is written), it was identified as the main backer for last year’s Congressional hearings on Kashmir.

The twinning is also apparent on social media. Take, for instance, this undoubtedly melodious song on Palestine and Kashmir, by an advocacy group that is apparently based in London, Rome, Istanbul, Toronto, and, of all places, Beijing. Unsurprisingly, its members are anonymous, but the song itself has hit the charts well on social media. Even more notable is the BDS Movement (Boycott, Divestment, Sanctions) with a near global reach, and some two lakh followers on Twitter. It just launched its first entirely poisonous video against the Modi government and its policies in Kashmir.

There’s more of this activity, particularly on social media, than can be adequately documented here. But the point is that the US and others, with very little knowledge about the Kashmir issue, particularly the state of affairs on the Pakistani side, are now being heavily influenced at a time when matters on the Gaza strip have taken centre stage. To put it even more simply, the Pakistanis and their allies have managed to piggyback on the Palestine issue to their advantage.

The irony is that those fighting for Palestine should wish they had even half the rights that Kashmiris have enjoyed for years. While their land has been steadily eroded, not an inch of Kashmiri land could be sold to outsiders till recently. Even after the setting aside of Article 370, new domicile laws still restrict land ownership in the state. Yes, it irks some Kashmiris. But that’s the truth when compared to the Gaza strip.

More importantly, hundreds of Indian soldiers have died fighting well-armed terrorists, but have never ever slipped into raising levels of force. Civilians have little idea of the sheer grit needed to ensure peace in Kashmir for those who really want it. Notice also that while Kashmiri Pandits were forced out, there are no Muslim Kashmiri refugees anywhere, unlike the 5.7 million Palestinians outside of their land. That counts for something. In an ideal world, neither conflict should exist. But as this account indicates, there are those who work tirelessly to ensure that peace doesn’t return to Kashmir. There’s money in it for some, prestige for others, and sometimes a whole career in academics. That’s the simple, ugly truth. It’s all about money. Just follow that trail. There’s a lot more here than just a Pakistani spending spree.