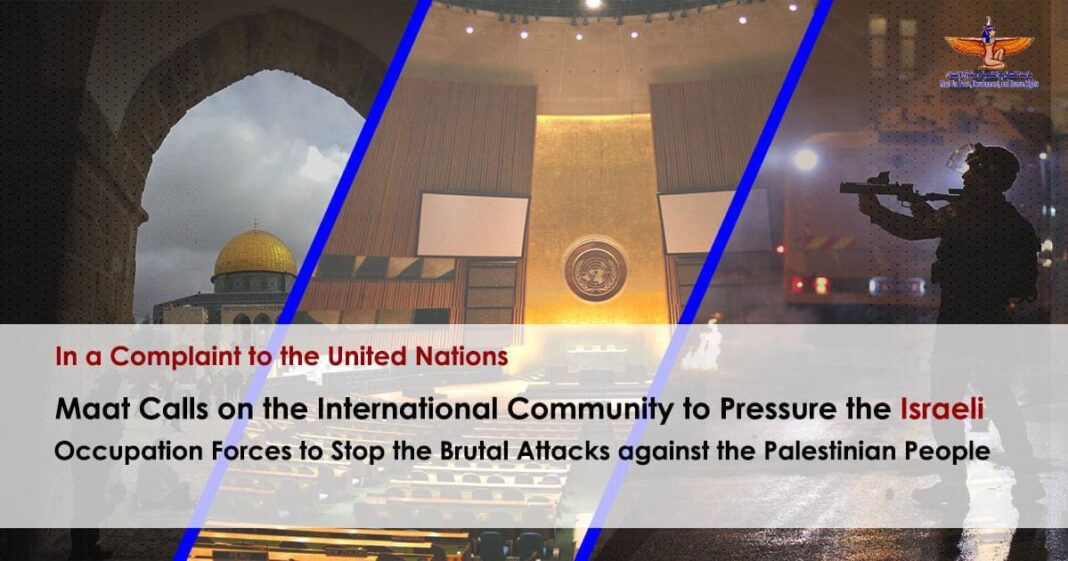 In a Complaint to the United Nations. Maat Calls on the International Community to Pressure the Israeli Occupation Forces to Stop the Brutal Attacks against the Palestinian People

Okeil: The international community must provide protection for the Palestinian people, and the International Criminal Court must conduct an urgent investigation

Sharif Abdel Hamid: There must be an international condemnation of the Israeli settler colonial system and the apartheid

Today, Monday, May 10, 2021, Maat for Peace, Development and Human Rights submitted an urgent appeal to the United Nations Special Procedures, especially, the Special Rapporteur on Adequate Housing & the Special Rapporteur on the Situation of Human Rights in the Palestinian Territories Occupied since 1967, bitterly denouncing the heinous attacks by the Israeli occupation forces and the extremist Jewish settlers on the courtyard of Al-Aqsa Mosque and the Sheikh Jarrah neighborhood in occupied East Jerusalem, and the forced displacement and illegal eviction of dozens of Palestinian families from their homes.

Over the past few days, the Israeli occupation forces have brutally terrorized and attacked Palestinian people, especially those existing in the courtyard of Al-Aqsa Mosque and its health clinic.
Peaceful worshipers inside the mosques were attacked by tear gas canisters resulting in the injury of hundreds of Palestinians. Moreover, the Israeli forces have fired live and rubber bullets, sound bombs and tear gas canisters at the Sheikh Jarrah neighborhood as well as Bab al-‘Amud and Bab al-Asbat areas.

In this appeal, Maat stressed that the inhumane practices of the Israeli occupation forces and the extremist Jewish settlers are part of the Israeli policy that is based on ethnic cleansing and colonial settlement through the confiscation of Palestinian lands, properties and homes for the benefit of settlement associations, in flagrant violation of all international conventions, norms and United Nations related-Resolutions.
Besides, the Israeli colonial settlements are incompatible with the provisions of the Rome Statute, including the prohibition of population transfer, annexation and apartheid.

Maat affirmed that this is not the first time families in Jerusalem are subjected to forced evictions after they were forced to flee their homes during and after the Nakba, and the continuous denial of their inalienable right to return to their homes and properties since 1948.

The occupation forces aim to change the demographic composition of the city to secure the Israeli control over Jerusalem.

In this context, Ayman Okeil, president of Maat, called on the Human Rights Council to hold an extraordinary session to issue a binding decision to stop the brutal attacks by the Israeli occupation forces against the Palestinian people, condemn the forced evictions of Palestinian families in the Sheikh Jarrah neighborhood, conduct an urgent investigation to prevent the Palestinian displacement, and transfer the case to the International Criminal Court.

Okeil also called for the need to provide international protection for the Palestinian people, and to oblige the Israeli occupation authorities to stop their ongoing violations and attacks in all parts of the Palestinian territories, including the occupied city of Jerusalem.

For his part, Sherif Abdel Hamid, director of the Research and Studies Unit at Maat, called on all member states of the United Nations to bitterly condemn the Israeli settler colonialism and apartheid system, and to recognize the role of illegal Israeli settlements and colonial companies in preserving and expanding this system, calling for meaningful and effective steps to be taken for addressing the system’s negative effects on Palestinian rights, providing full support to the Office of the Prosecutor and the International Criminal Court, and refraining from all acts and omissions that may contribute to the impunity of perpetrators.