Home Crime J&K: Kashmiris are not a monolith; Those who don’t walk with the... 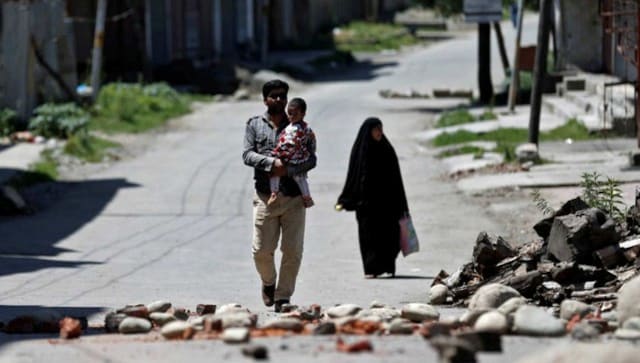 The hapless Kashmiris who were forced into this proxy guerrilla war in the late 80s and early 90s, have to deal with either the mainstream ‘narrative’ terming them as secessionists or willy-nilly as terrorists, depending which side of the binary one is. Add to that the helplessness of having to prove your Kashmiri-ness time and again whether in public or private life. A monolith is a large, impersonal, political, corporate or social structure regarded as indivisible and slow to change. Conflict entrepreneur “experts” on Kashmir who project Kashmiris as a monolith have been deviously disregarding the internal dissent and resistance to the regressive aspiration of “azaadi” by a few secessionists.

They make the existence of dissenters of “azaadi” seem inconceivable, their modus operandi being to label those who oppose as not Kashmiri enough or Muslim enough.

The hapless Kashmiris who were forced into this proxy guerrilla war in the late 80s and early 90s, have to deal with either the mainstream “narrative” terming them as secessionists or willy-nilly as terrorists, depending which side of the binary one is.

So if you condemn the Pakistan-sponsored terror, you are not Kashmiri enough, if you advocate democracy (elections/the ballot/sarpanches), dissent (pro-India), freedom of speech (right to music bands, critical works, liberal spaces), then you are not Muslim enough, and that can mean automatic target practice for the likes of the TRF (The Resistance Front, actually a front for the LeT and Hizbul Mujahideen) in the Valley.

For three decades, various types of Kashmiris have been reeling from this siege of the mind by Islamo-fascist forces from within, without documentation of their dead and disappeared.

It doesn’t matter that you have eked a living there, that you are bringing up children there, that you belong to the place by birth, and that your ancestors are buried or burnt on a pyre there. You may be Sikh, Buddhist, Christian, Muslim, or Pandit, if you do not agree to the regressive aspirations of the Intifada factory (a motley crew of overground workers, politicians, bureaucrats, journalists, civil society members,writers, talk show experts, etc), it is an unspoken law that you have no right to be in Kashmir.

Various tactics are then deployed to hound you out of the Valley or silence you. From 1989 autumn onwards, Kashmiri Pandits, seen as upholding the Indian nationalism in the Valley were targeted through high-profile assassinations, sending a clear cut message to everyone — to join, or get killed, or get lost — a popular Kashmiri slogan in coordinated marches, “raliv, chaliv ya galiv”.

Amidst this, what is not being said openly is that Muslims who were secular, liberal, progressive, or high-profile Leftists affiliated to the various communist parties,and popular rationalists were also put on hit-lists circulated by the various “tanzeems” (terror organisations). The mass exodus of the Pandit minorities did not just comprise of KPs but Muslim dissenters of “azaadi” too, many living in horrendous conditions as the migrant camps.

When the Mirpur-London-Washington lobby of the Kashmir Intifada lobbies on platforms around the world in university campuses and UN councils, it conveniently forgets the human rights of those exiled by the Nizam-e-Mustafa ideology advocated by terror groups, legitimised by separatist politicians, and coddled by the Government of India.

This manufactured consent for “azaadi” is peddled by the likes of Sanjay Kak, long migrated, non-residents, and “conflict entrepreneurs”, having built a career as artists, film-makers, photographers.

When in his interview he says, “Kashmir lays India bare” and that “the old trusted cliches  — largest democracy in the world, constitutional proprieties, free media — all these have started to look very shallow”, one needs to understand why the blame is being shifted from Pakistan-sponsored proxy war against India via Kashmiri collaborators.

In this asymmetric war, the Indian State has to fight, keeping the above “cliches” intact, often failing because the “enemy” has the deadliest terror tactic in the world: psychological warfare extorting clan loyalties, tribal ties, all in the name of religion.

It is an ever-losing PR nightmare. Every time there is a violation, and there will be countless times, the Intifada hounds pounce on it, denounce the Indian State, coordinate mass social media accounts, some originating from across the border, activate trolling, and ready-to-print Op-eds in Washington Post, The New York Times, etc.

Not to mention the various associate professors, in numerous “anthropology departments” tweeting, publishing papers, churning podcasts, and holding “human rights”conferences. Amidst all this, the silent majority just becomes a statistic, a pawn, a passive observer.

This elected mutism by the silent majority, has several reasons, the primary one being a sense of self-preservation. Pulitzer winners only document the rage, the hatred, the frustration, the radicalisation, the high-handedness of the security forces and the aftermath.

What they will never do is refer to the underrepresented, the repressed, the hidden, the silent dissenters about secession.

Of course, due to the network of this manufactured consent, and the subsequent risk to life, limb, and property, the “silent” will never elect to come forward. But they exist and they resist in their own ways. Documentaries, movies, poetry, rap songs, cartoon strips, art works, lit-fests, photographs, seminars, conferences, talk shows will never take into account these “silent sentinels”, who have to compromise on the quality of life, and the sanity of their minds, just to survive amidst the fascism of their own and the bravery of being out of range by the overseas Intifada lobbies.

What the citizens of India need to understand is that sometimes the flag is not upheld in plain sight, sometimes, patriots carry the flag in their hearts, in their minds. Sometimes nationalists have to worry about the fate of their families, in an “Orwellian” ecosystem which has been perfected by the Islamo-fascist forces since the mid-80s.

The government, by its appeasement policies of decades towards the separatist politicians, has not been able to manufacture trust in these nationalists. Hence the hesitation to come forward and fight. Like the overseas Intifada lobbies, they do not have the luxury of being brave out of range.

They are in the direct line of fire, as the convenient “mukhbir” and “kafir”.

Kashmiris as a society, as a people are not a monolith. Not everyone hates India, not everyone wants a merger with Pakistan, not everyone is a terrorist. And those who don’t walk with the herd are in no way any less Kashmiri or Muslim.