Home OPINION “The Nile for Peace” Maat endorses CSOs to Call for Preserving the... 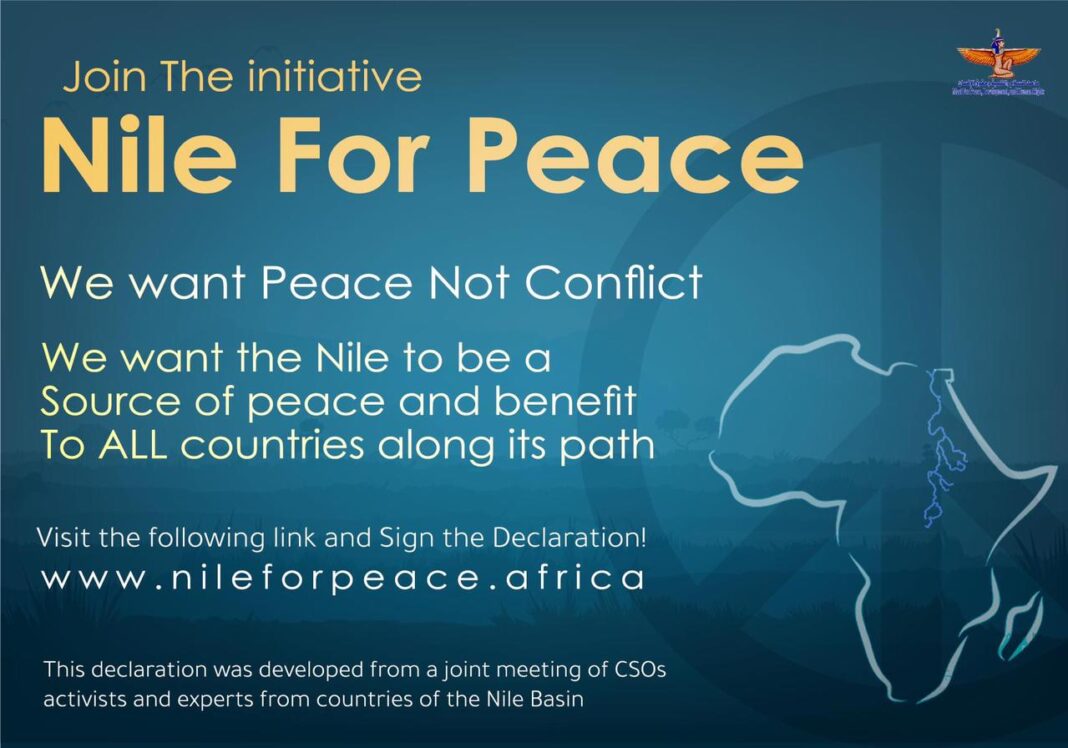 Okeil: The document comes within the framework of the efforts made to involve more mediators to reach a legally binding agreement

Monsif: The document activates the role of civil society organizations, the media and stakeholders in spreading awareness about this issue
Realizing the critical need to take urgent actions to maintain peace and security in the Nile Basin region, and in its capacity as a founding member of the initiative entitled: “African Water for Peace: The Nile for Peace”,

Maat for Peace, Development and Human Rights launched a campaign to endorse CSOs on the initiative’s outcome document that was developed during a joint meeting attended by representatives of civil society, academics, experts and professionals in the Ugandan capital, Kampala, from 6 to 10 April 2021, to consult on the ongoing disputes over the Grand Ethiopian Renaissance Dam (GERD) and the construction of other mega projects along the Nile.

The River Nile can serve as a successful model of cooperation at times of conflicts and disputes. Urgent action is needed now because peace and security in the region are at stake. The developed document aims to prevent any potential disputes in the Nile Basin region and the entire continent and to encourage the equitable use of water to achieve comprehensive and sustainable development for citizens. The document stresses that only through diplomatic negotiations these disputes must be resolved, otherwise water conflicts will definitely destabilize the region and aggravate the suffering of peoples, not only in the three warring countries but in the entire African continent.

The document calls on the Ethiopian government to consider delaying the second filling of the Renaissance Dam to avoid an escalation of the conflict. In that case, if Ethiopia was affected by the delay, the international community and Egypt should compensate it, within the framework of mutual cooperation and assistance in development projects in Ethiopia.
Moreover, the document stressed that a legally binding agreement on the filling and operation of the dam should be reached before the second filling.

In this regard, Ayman Okeil, President of Maat for Peace, Development and Human Rights, stated that the document recognizes the right of governments to achieve development for their peoples, provided that this development should not affect the rights and interests of other countries. Okeil further emphasized that this document comes within the framework of the efforts made to involve more mediators in the negotiation process based on the principles of goodwill in international relations, with the aim of reaching a legally binding agreement on sharing the regional benefits of water resources.
Hagar Monsif, head of the African affairs and sustainable development unit at Maat, added that the document comes as part of the efforts to activate the role of civil society organizations, the media and stakeholders in publishing various views on this issue and avoiding what leads to the escalation of the current situation. Monsif underlined the role of these bodies in raising awareness about the natural and historical rights to the Nile waters and the larger ecosystem of all projects implemented on the Nile Basin, through encouraging independent and institutional research on the Nile River in general and the Renaissance Dam project in particular.

It is worth noting that speeding up the declaration signature accelerates the action-taking process and contributes to achieving peace and security in the region, setting a good example of how to turn adversity into opportunity.