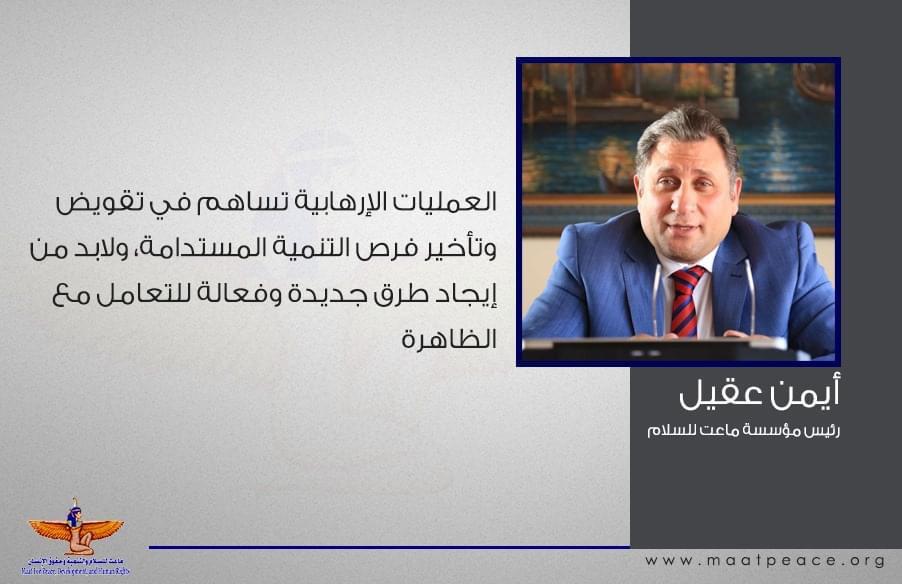 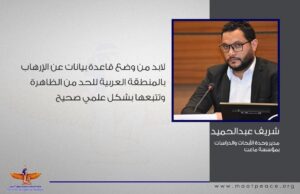 and prevent sustainable development opportunities, and new and effective ways must be found to deal with the phenomenon

Sherif Abdul-Hamid: It is necessary to establish a database on terrorism in the Arab region to limit the phenomenon and track it in a correct scientific manner
Maat for Peace, Development and Human Rights issued a quarterly report on the phenomenon of terrorism in the Arab region, which monitors all terrorist operations, associated activities, and interactions within terrorist groups during the period from April to June 2021.
In tracking terrorist operations, the report relied on more than one research and investigative approach in the two operations of monitoring and analysis to achieve the greatest possible benefit and produce the most accurate results.

The report also indicated that a large number of terrorist operations occurred in war-torn countries, either as a result of ongoing armed conflicts, as is the case in Somalia, Syria, and Yemen, or countries that are a party to an armed conflict, as is the case for the Kingdom of Saudi Arabia, which was targeted by the Irani-backed Houthi group with about 44 terrorist operations, or countries suffering from severe political polarization, and clear security gaps, such as the case in Iraq.

For his part, Ayman Okeil, president of Maat, said that the phenomenon of terrorism is one of the most serious threats to international peace and security in the Arab region.
It is considered to be a major threat against civilians, given the intimidation and indiscriminate violence practiced by armed groups in this region to achieve political goals, sometimes motivated by external tendencies, especially since these groups do not disdain the human and material losses that affect civilians in the first place and contribute to undermining and delaying development opportunities in the countries targeted by terrorist operations.
Okeil added that terrorism occupies a remarkable space that cannot be overlooked in the plans of Arab governments of all kinds, because it causes the loss of the lives of military and civilians alike, the destruction of public and private facilities, and the threat to society in all its categories by spreading fear and terror in the hearts of its members, and the Arab citizen finds himself caught between the guillotine of terrorism and violent extremism on one hand, and the consequences of government measures taken to combat terrorism, which often involve restrictions, even if unintended, for public rights and freedoms on the other hand.

Okeil added that despite the great cost of counter-terrorism activities that aim to eradicate the phenomenon, the costs of leaving the phenomenon unaddressed are much bigger given the devastating toll it takes on economic, social, or security sectors.
So, there is an absolute need to work on finding new and effective ways to deal with the terrorism phenomenon.

For his part, Sherif Abdul-Hamid, director of the Research and Studies Unit at Maat, said that despite the efforts made to counter-terrorism and the proactive operations that are announced to curb terrorism and its leaders in a wide range of Arab countries, extremist groups, especially ISIS, the Somali Youth Movement, the Houthi group, and Al-Qaeda, which have re-emerged in Yemen, after their activities have been diminished in the previous months, and are still able to operate and recruit young people and children under the eyes of security forces, particularly on the internet.
Moreover, they continue to search for new funding sources so that they can re-adapt their situation and withstand for a longer period. Abdul-Hamid added that although Daesh and other extremist groups active in the Arab region are no longer controlling territories in the countries in which terrorist operations are carried out as it was before Daesh lost its last strongholds in Iraq and Syria, the threat of these groups still exists.
These organizations are still able to plan and implement new operations, mobilize more support, funding, and recruit fighters, despite the counter-terrorism efforts made by Arab countries in this context.
Abdul-Hamid called for the need to establish complete databases on terrorism in the Arab region to limit the effects of the phenomenon and track it in a correct scientific manner, due to the lack of information and data on the terrorism phenomena, and the politicization of these data at other times may result in mistreatment of the phenomenon and thus increase the rates of terrorism and related crimes, and not developing appropriate reform plans and programs to address it.
The existence of a database on terrorism is a prerequisite for measuring the level of Arab security, fear of terrorism, its levels, types, and causes.