Home Crime The core question on criminalising the practice of talaq-e-biddat has not been... 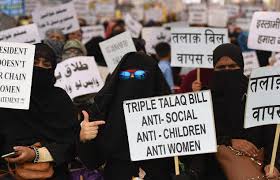 Both Houses of Parliament have passed a Bill making instant triple talaq a criminal offence, amidst persistent doubts whether it ought to be treated as a crime or just a civil case. It is true that the Muslim Women (Protection of Rights on Marriage) Bill, 2019, is a diluted version of the Bill as it was originally conceived. Earlier, it did not specify who could set the law in motion. Now the offence is cognisable only if the affected wife, or one related to her by blood or marriage, files a police complaint. A man arrested under this law may get bail, after the Magistrate grants a hearing to the wife. Thirdly, the offence is compoundable, that is, the parties may arrive at a compromise. The government says its main objective is to give effect to the Supreme Court’s 2017 verdict declaring instant triple talaq illegal. It claims that despite the court ruling, several instances have been reported. Making it an offence, the government says, will deter further resort to triple talaq, and provide redress for women in the form of a subsistence allowance and custody of children, besides getting the erring husband arrested. However, the core question regarding the necessity to criminalise the practice of talaq-e-biddat has not been convincingly answered.

In the light of the Supreme Court ruling on its validity, there is really no need to declare instant triple talaq a criminal offence. The practice has no approval in Islamic tenets, and is indeed considered abhorrent. Secondly, once it has been declared illegal, pronouncing talaq obviously does not have the effect of “instantaneous and irrevocable divorce” as this Bill claims in its definition of ‘talaq’. The provisions that allow a woman to claim a subsistence allowance from the man and seek custody of her children can be implemented in the event of the husband abandoning her, even without the man’s arrest. If triple talaq, in any form, is void, how the questions of children’s custody and subsistence allowance arise while the marriage subsists, is not clear. And then, there is the practical question of how a man can provide a subsistence allowance while he is imprisoned. It has been argued by the Bill’s proponents that dowry harassment and cruelty towards wives are treated as criminal offences even while the marriage subsists. It is a patently wrong comparison, as those acts involve violence and cruelty and are rightly treated as criminal offences. The same cannot be said of a man invoking a prohibited form of divorce. The BJP projects the passage of the Bill as a historic milestone in the quest for gender justice. Such a claim will be valid only if there is a non-sectarian law that addresses abandonment and desertion of spouses as a common problem instead of focusing on a practice, which is no more legally valid, among Muslims.