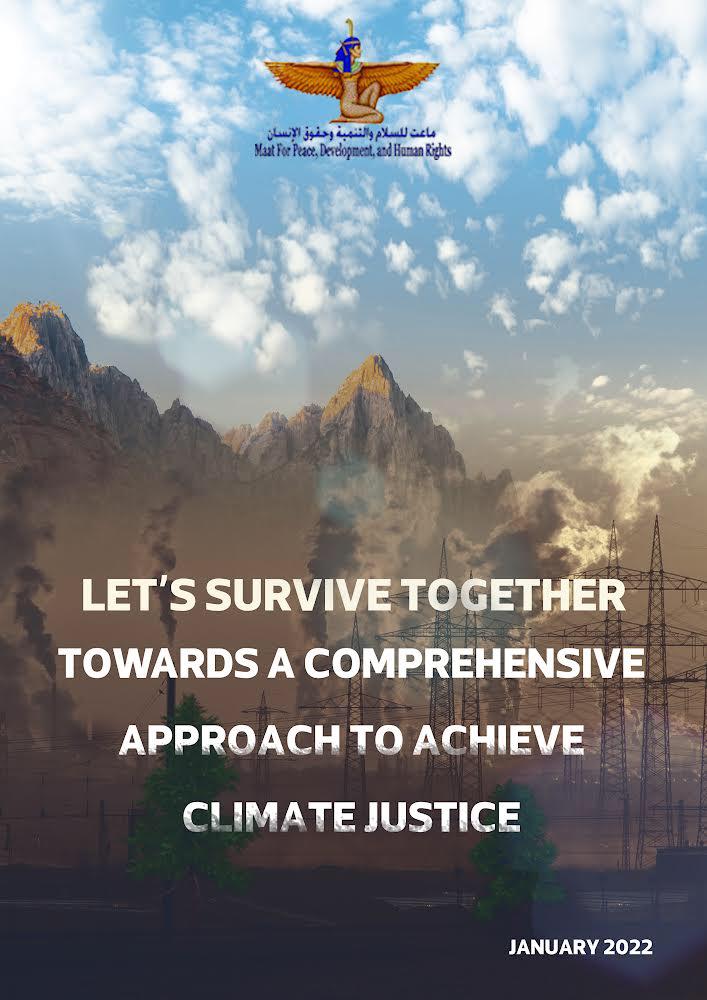 Ayman Okiel: There is no way to survive climate change unless we achieve climate justice……
Ahmed Salah: African countries lack the necessary resources to face the effects of climate change…….
In the context of Maat for Peace, Development and Human Rights’ interest in the achievement of Sustainable Development Goals (SDGs) and in line with the SDG 13 aiming at taking urgent action to combat climate change and its impacts, Maat’s Policy Analysis Unit has recently released a new policy paper entitled “Let’s Survive Together… Towards a Comprehensive Approach to Achieve Climate Justice”. This paper comes as part of a series of publications on green economy and sustainable development, and aims primarily to address many economic and social challenges through the analysis of existing policies and the opportunities of implementing alternative solutions within a set of proposals and recommendations at the level of public policies.
This paper sheds light on the issue of “climate justice” and highlights the fact that the most vulnerable countries to climate change are the least productive of carbon dioxide (CO2) emissions, and the ones that have contributed the least to global warming crisis. In addition, these poor countries lack the financial resources to face the negative repercussions of climate change. Major countries, on the other hand, continue their industrial activities and processes that result in the dramatic increase in greenhouse emissions, in blatant disregard for the recommendations aiming at curbing climate change.
Moreover, these countries refuse to financially support developing countries so that they can stand before the negative repercussions of this change.
In this context, Ayman Okeil, the international human rights expert and the president of Maat for Peace, explains that achieving sustainable development goals and taking effective actions to combat climate change and its impacts requires all parties concerned to promote and help realizing the idea of ​​”climate justice”, and requires countries, especially major ones, to bear the responsibility for addressing the accelerating crisis of climate change that they have played a key role in aggravating it.

To serve their economic interests, these countries have caused irreparable damages to the environment and the climate; thus, they are obliged to provide all kinds of support and assistance to developing countries whose contribution to thermal emissions is almost non-existent. In this light, it is not fair at all to leave these countries to face the disastrous consequences of climate change without real international support.

On his part, Ahmed Salah, deputy director of the Policy Analysis Unit at Maat, says that African countries are among the countries most vulnerable to the repercussions of climate change, and they lack the necessary resources and knowledge to confront these repercussions, due to external interference in their affairs and lack of stability. Part of these negative repercussions can be seen in the shrinking water resources that African countries are suffering from, which gives rise to the alarming phenomena of internal displacement, and the conflict over arable lands and natural resources.
Salah added that Africa needs to obtain international funds estimated at $100 billion to develop clean energy projects such as green hydrogen projects, maximize utilization of the natural resources endowed to Africa, in addition to the equitable use of these resources, and implement projects to counter the effects of desertification and water shortage, to ensure that the effects of climate change in Africa and the resulting disasters are halted.
To Read the paper please follow this link:
https://www.maatpeace.org/en/?p=34406