Home CRITICLES Why February 5 is bizarrely ‘celebrated’ as “Kashmir Solidarity Day” in Pakistan? 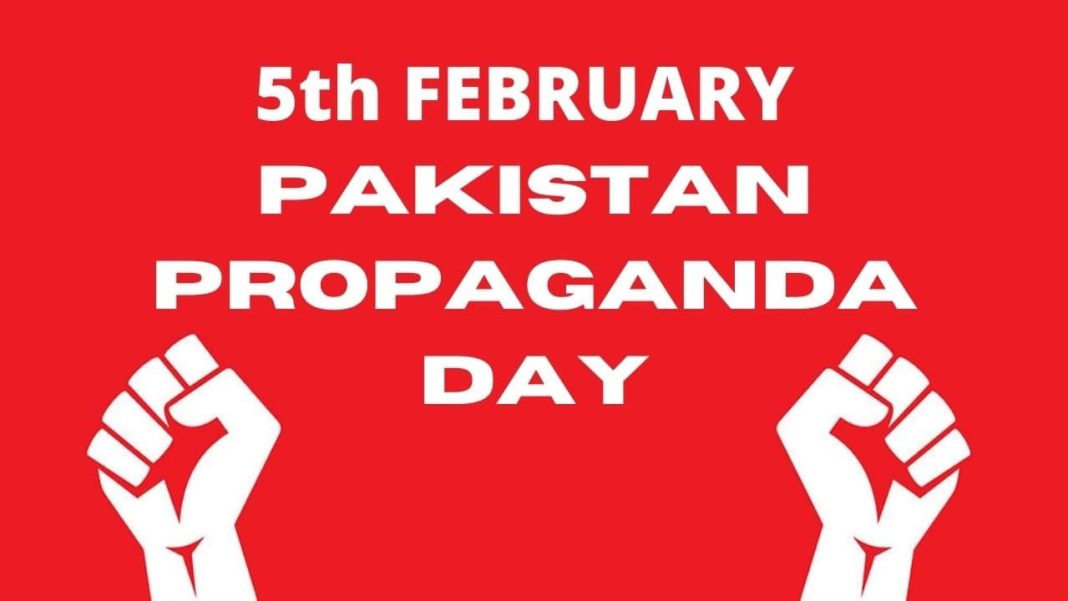 Every year, February 5 is unabashedly and bizarrely ‘celebrated’ as something inappropriately titled “Kashmir Solidarity Day” in Pakistan. From the Pak-sponsored media outlets to the so-called human rights organizations, NGOs and a few dubious international bodies bred by the Pakistani interests, many attempt to create a global hue and cry on this day. Some of them organize workshops, webinars, quiz contests, sit-ins, rallies and drawings to observe the 5th February with great gusto.

But in reality, the self-styled “Kashmir Solidarity Day” should serve as an occasion for Pakistan to introspect on the sorry state of affairs it has created in both of its occupied territories; Pakistan-occupied Jammu & Kashmir (PoJK) and Gilgit Baltistan (GB). Historically though, the “Kashmir Solidarity Day” has no backing or moral grounds to be supported. All in all, the agenda is to pave the way for capturing Kashmir’s water and other rich natural resources that Pakistan has long been eying upon.

February 5 is actually an occasion that should be mourned and commemorated, rather than ‘celebrated’, as a day when Pakistan-backed cross-border terrorism and violent civilian killings began in the valley of Kashmir.

February 5 is the day when people should not forget how Pakistan began its genocide of Kashmiri Pundits in the Valley of Kashmir from January 1990 onwards. Thus, “Kashmir Solidarity Day” is nothing short of a Pak propaganda day which is only observed to further the nefarious narratives of communalism, violent extremism for creating and perpetuating social and political instability in the valley of Kashmir. With the same intent in mind, every year some phoney demonstrations are held in Pakistan, as well as in Pakistan-occupied Jammu Kashmir (PoJK) and Gilgit-Baltistan (PoGB).

“Kashmir Solidarity Day” celebration is a brazen violation of the truth and a blatant lie on part of the Pakistani establishment. While it speaks so loud of a fake ‘solidarity’ with the people of the Indian Union Territory of Jammu and Kashmir, the people of PoJK and PoGB, as well as the rest of Pakistan, have been living in extreme poverty without basic human rights since October 22, 1947, under the occupation of the religio-fascist Pakistani military.

For the past three years, both PoJK and PoGB have faced severe wheat shortages, resulting in starvation in several pockets across the occupied territories. Ex-servicemen have not received a single paisa in pensions; employees have not received salaries for a year; load-shedding of up to 20 hours in Gilgit and Skardu and 18 hours across PoJK; scarcity of water after rivers were diverted to other uses.

Thus, clearly, the agenda of using ‘Kashmir Solidarity Day’ is to divert global and local public attention from the internal failure of the political leadership of Pakistan. Even a layman in Pakistan is totally aware of this façade of the Kashmir Solidarity Day. People in the Jammu & Kashmir UT across the borders are also awake now. They do understand that the ulterior motive of Pakistan behind this pernicious attempt is to portray India as their enemies and that using ‘Kashmir Solidarity Day’ has neither benefitted the Kashmiri people in the past nor is going to do any favour for them in the future.

The new progressive generation in the Kashmir valley should not forget that the drama of ‘Kashmir Solidarity Day’ was first staged by the Amir of Jama’at-e-Islami Pakistan, Qazi Hussain Ahmed. He was instrumental in the initiation of the celebrations on the so-called Kashmir Solidarity Day in 1990. Since then, the politically motivated Islamist entities across the borders have been observing the 5th of February as “Youm-e-YakJehti-e-Kashmir” or Kashmir Solidarity Day.