Home Career From The Sikh Tradition: In Service Of Humanity 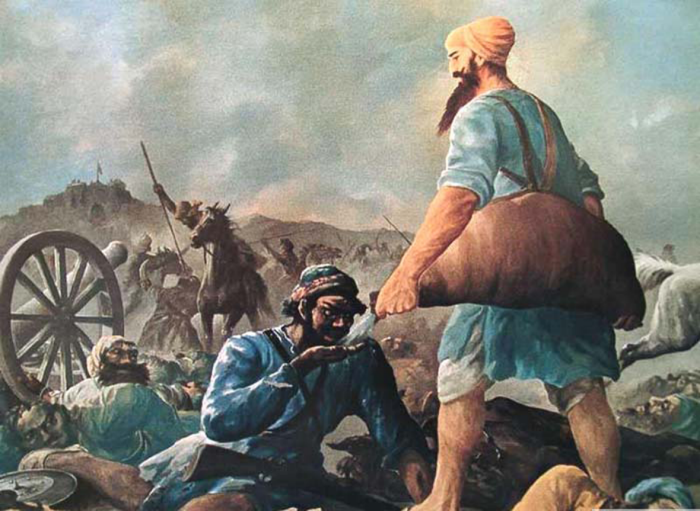 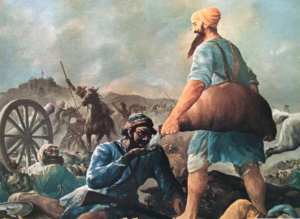 Bhai Kanhaiya Lal (1648-1718), left his service as an officer in the Mughal army, and came to serve the 9th Sikh Guru, Guru Tegh Bhadur ji

After the martyrdom of the Guru he longed to meet the noble Guru’s successor, Guru Gobind Singh ji, the 10th Sikh Guru.

Arriving at Anandpur (Panjab) in 704 C.E. Bhai Kanhaiya found that the Guru and his followers under attack by the combined forces of the Rajput Hill Chieftains and the Mughal army.

The Rajputs and Muslims who together ruled over much of India, simply could not tolerate any other political or self defence entity.

The greatly outnumbered and outgunned Sikhs were fighting valiantly to defend themselves and the battlefield was littered with wounded and suffering soldiers from both sides.

Amongst the wounded wandered a solitary figure, the Sikh, Bhai Kanhaiya trying to help those he could and giving them water from a mashk irrespective of whether they were Sikh, Hindu or Muslim.

The Nihang, the Sikh warriors were very annoyed with Bhai Kanhaiya, they dragged and threw him in front of Guru Gobind Singh ji for suitable punishment for aiding the enemy.

The Guru asked Bhai Kanhaiya if the charges of treason were true?
Bhai Kanhaiya replied, “I see no enemy, all I see is you, my beloved Guru. Have you not taught us, that to destroy enmity, we see the divine in each being? That is why I assist and serve water and provide solace to the wounded irrespective of who they are.

The Guru proclaimed to the Sikhs “Bhai Kanhaiya is a true Sikh. He has understood and imbibed the meaning of the universal brotherhood of Sikhism. His service towards others without discrimination is highly praiseworthy. He is an inspiration to all of humanity and I bless him that in time he establish a great movement to selflessly serve humanity. I ordain that none will come in Bhai Kanhaiya’s way to perform his noble duty.”

The Guru blessed Bhai Kanhaiya and handed over to him a large medicine chest and requested Bhai Kanhaiya not only to serve the wounded with water but to apply these medicines to heal their wounds.

Many Sikhs, Muslims and Hindus who received the selfless love and service of Bhai Kanhaiyalal and survived, were drawn to his noble cause. Upon leaving the service of their Masters they either joined his mission or started selfless service on their own.

The Sewapanthi or Addanshahi order of Sikhs which started by Bhai Kanhaiya a hundred and fifty years before the Red Cross was founded in 1864 by another great being Henry Dunant in Europe.

The Sewapanthi order continues to render noble service to people irrespective of religion, caste or gender across numerous centres across North India. Proving once again, ‘When the Guru blesses, it is certain to succeed’.