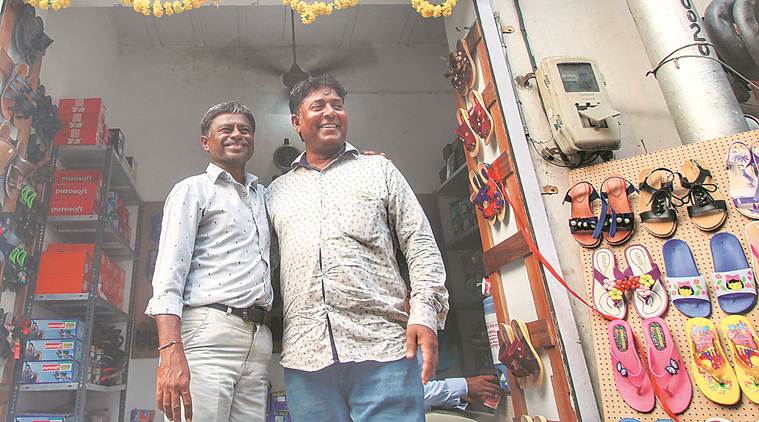 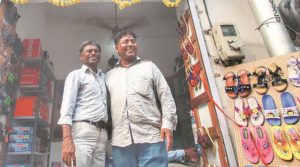 Marking a fresh start, Ashok Parmar alias Ashok Mochi, (45), a photo of whose saffron-bandana-clad, iron-rod-wielding self after the 2002 Godhra train burning had become a photographic reminder of the carnage, opened a shoe shop in the city Friday. Cutting the ribbon to mark the inauguration of the shop was Qutubuddin Ansari, a tailor recognisable for his photo seen pleading for help on February 28, 2002 during the riots.

Mochi has been repairing shoes for over 25 years on the footpath near the Delhi Darwaza. “With the Metro construction, whatever little I used to earn, even that was affected. Say from Rs 300 per day, I could barely make Rs 150 per day,” he told this paper on Friday.

Funds for Mochi’s shop, named ‘Ekta Chappal Ghar’, as well as initial funding for carrying out his business, have been provided by the Communist Party of India (Marxist) in Kerala.

For now, Mochi will be selling ready-made shoes, bought from the wholesale market of Ahmedabad. There isn’t any specific vendor tie-up but subsequently Mochi expects to find one, including vendors from Delhi, which has a more expansive wholesale market.

Qutubuddin Ansari, who was the guest of honour at Mochi’s shop opening, had temporarily settled in West Bengal in the aftermath of the riots. Ansari, a tailor, was caught on camera pleading to Rapid Action Force (RAF) personnel for help, from his home on the Narol-Naroda road on February 28, 2002, when the riots were at its peak in Naroda Patiya area of Ahmedabad. The picture of his blood stained shirt and his tear-filled eyes became the image that spoke for the victims of the Gujarat riots.

Ansari is wary of disclosing when he returned to the city but says he came back after “things became normal”.

Ansari continues to work as a tailor with a workshop set up at his home, procuring ready-made cloth from cloth markets. “I do the stitching and sewing labour and then sell it at the same market. I get the labour wages,” says Ansari.

Speaking about his relationship with Mochi, Ansari says, “We keep meeting from time to time. He (Ashok) told me he wanted me to inaugurate his shop and I agreed. What more can I want other than to see him do well. I inaugurated (the shop) and even bought a pair of slippers. I wish him well and I hope his business flourishes.”

Mochi had joined the Dalit Azaadi Kooch in Gujarat in 2017 to fight for the rights of his community after the public flogging of Dalits in Una. Seen cutting a busy figure of a warm host at the inauguration of his shop, Mochi points out, “This is the Hindu varna system that continues to keep me stuck as a cobbler. They don’t let us move ahead.”

This Lok Sabha election, Mochi and Ansari, were seen campaigning in Kerala for CPI (M) candidate P Jayarajan, who was contesting from the Vatakara constituency in north Kerala. Although the images of Mochi and Ansari have been used by political parties in elections in several states since the riots, this was the first time they were part of an election campaign.