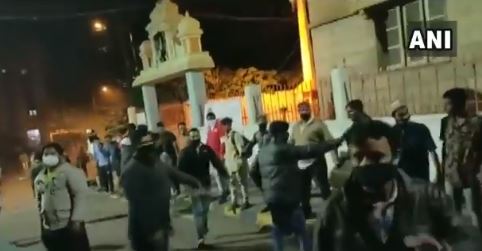 Avideo claiming that a group of Muslims gathered at the DJ Halli police station limits in Bengaluru and formed a human chain to protect a temple from arsonists after violence erupted in the city is doing the rounds on social media.

News agency ANI tweeted the video captioned: A group of Muslim youth gathered and formed a human chain around a temple in DJ Halli police station limits of Bengaluru city late last night, to protect it from arsonists after violence erupted in the area. (Video source: DJ Halli local).

A Facebook post laced with communal remarks sparked violent clashes in Bengaluru on Tuesday night in which a mob vandalised a police station and the residence of a Congress MLA. Three people have been killed while 60 police personnel have been left injured after being attacked by the mob.

After night-long tension following the arson and vandalism in the DJ Halli area of Bengaluru, police said Naveen, whose social media post sparked the vandalism, has been arrested.

As the police teams tried to control the mob from damaging property and setting things on fire, the mob rampaged through the locality. Around 10-15 cars were set on fire in the area while a part of the MLA’s residence was also damaged. Police vehicles were damaged and set on fire. A group entered a basement area where 200-250 vehicles were set on fire, said the Commissioner.

A total of 110 people have been arrested so far for vandalism and attacking police personnel during the violence that broke out in DJ Halli locality in Bengaluru.