Home Crime JAMMU DRONE ATTACK AND PAKISTAN’S ASYMMETRIC WARFARE: HOW VULNERABLE ARE WE? 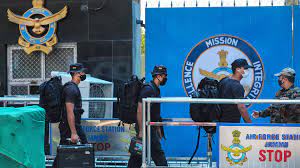 If true, this would be the first-of-its-kind drone attack on a high-security vital asset in India.

In the wee hours of Sunday, 27 June, two low-intensity explosions rocked the technical area of the Air Force base in Jammu Airport. “One caused minor damage to the roof of a building while the other exploded in an open area. There was no damage to any equipment. Investigation is in progress along with civil agencies,“ IAF’s Media Coordination Centre tweeted on Sunday morning.

Media reports soon flooded the internet that the Improvised Explosive Device (IED), probably shaped charges, were dropped by drones (this was not confirmed by official sources at the time of writing).

If true, this would be the first-of-its-kind drone attack on a high-security vital asset in India. It brings to fore a whole new dimension with grave implications to the protection of our vital areas (VA), vital points (VP) and defence & security assets.

AFS Jammu is a “highly sensitive” base — a red zone where security personnel would be authorised to shoot down an unidentified flying object or Remotely Piloted Aircraft (RPA). Yet the intruder slipped-in and delivered its deadly payload.

DRONE ATTACKS ARE NOT NOVEL

The battle between weapon and countermeasure is an eternal one; one can never be complacent. The latest development is neither unforeseen nor novel in asymmetric war or low-intensity conflicts. The years since 2015 have seen commercial-off-the-shelf (COTS) drones being increasingly used by terrorists to deliver IEDs, frustrating security agencies and inflicting losses.

The drone attacks claimed by Yemen’s Houthi rebels on two major oil installations in Saudi Arabia in September 2019 is still alive in public memory. The Houthis reportedly launched the audacious attack with ten drones, deep inside Saudi territory, bridging the 500-mile chasm between Yemen and Saudi Arabia through innovation that drives asymmetric warfare.

The spate of such drone-borne attacks has continued as recent as June 2021 when another oil installation inside the Saudi capital Riyadh was set ablaze.

In a more conventional theatre, Azerbaijani drone strikes rained death and destruction in November 2020, pounding Armenian tanks, soldiers, artillery, and air defence systems. In December 2020, Forbes magazine carried a story by Vikram Mittal that clearly spelt out drones as the next IED that will be used against US military.

The latest attack by hostile elements in Jammu should thus come as no surprise for commanders in sensitive areas. If pizzas can be delivered by drones, so can IEDs. The users in this case need no permission from authorities to launch their drones either.

They can select the target, platform, timing, and aerial route of their choosing to ensure complete surprise — aspects fundamental to asymmetric warfare. Experts have been sounding a grim caution about such attacks for sometime now. However, the warnings don’t seem to have got the attention or speedy redressal it deserved, possibly due to the services’ traditional frostiness towards the ‘unmanned’ community.

That the attack came when it did on the technical area of a dual-use airport housing only some IAF helicopters, without causing major damage, is sheer providence; the clock had been ticking on this bomb from a while ago. The Jammu attack could perhaps be a test balloon — a trial run of sorts — for more audacious and effective low-cost attacks in the days to come.

HOW VULNERABLE ARE WE?

Blessed with the magic of vertical lift and after speaking to some experts, I would peg our vulnerability to such drone-IED delivery as “very high”. Such flying objects are hard to detect, do not have a significant visual, radar, infra-red or noise signature, and require nil to minimal infrastructure / launchpads.

While we may keep raising the height of our perimeter walls, electrify our fences & wrap them in concertina, commercially available hobby drones simply thumb a nose at physical barriers and fly over them. The IED by itself needs to be only that powerful to set off explosions; fuel and payload in the target area will do the rest.

In pictures doing the rounds on social media, the IED seems to have dug a hole into the roof of a building in AFS Jammu. If it was a hangar or a busy tarmac, results would have been disproportionate to the payload carried.

Locationally too, some of the defence bases are very vulnerable, even though they may not have a high-enough threat perception. To my mind, it is simply a matter of ‘when’ and not ‘how’.

In November 2010, then US President Barack Obama landed in Mumbai’s Chhatrapati Shivaji International Airport at Santacruz and was flown down in Air Force One to the naval helibase INS Shikra in Colaba.

Just two years earlier (Mumbai attacks, 26 November 2008), Pakistani terrorists arriving by the sea had wreaked horror around the same location. The naval helibase is surrounded by sea on one side and high-rise buildings and slums on other sides. The seafront and every single hutment and building that overlooks Shikra was ‘secured’ by police and special forces during the VVIP helicopter landing. Armed drones were not seen as much of a threat then, at least by our side.

Eleven years later, it would be unwise to overlook the danger drone-IEDs pose to such “sitting ducks”. Another high-security naval air base on the western seaboard faces a similar situation. Inconsiderate development and illegal buildings line the base’s perimeter — so close one can launch into the base without a springboard. It would be a drone-equipped terrorist’s delight.

RELYING ON INNOVATION & TECHNOLOGY COULD HELP

Conventional beat patrols are defenceless against such threats unless concrete and timely intelligence is available. In the event of a drone sighting, the OODA loop will be very short and test traditional rules of engagement. Many such examples abound in bases across the country. Are we prepared?

A serious audit of all VAs and VPs for their vulnerability to drone-IED attacks, and the defence mechanisms required thereof is called-for. In all likelihood, such studies and their voluminous reports must be catching dust in some headquarters in MoD. We just don’t take the UAV community seriously enough. Do we need a bunch of rag-tag extremists with a do-it-yourself kit downloaded from the net to kick us out of our complacency?

The security establishment will likely go into an anti-drone overdrive in the wake of the Jammu attack. One hopes there are no knee-jerk reactions or return to business as usual.

A cautious but time-bound approach that is adaptive, relies on technology and innovation rather than more boots on the ground, is recommended. But first we must accept the threat as clear and present. There are enough subject matter experts in our UAV squadrons who have been sounding this alarm. It is time to take them seriously.

The enemy in this case is lean and agile, carrying a poor-man’s guided weapon costing less than half the base commanders monthly salary. And time is on his side.