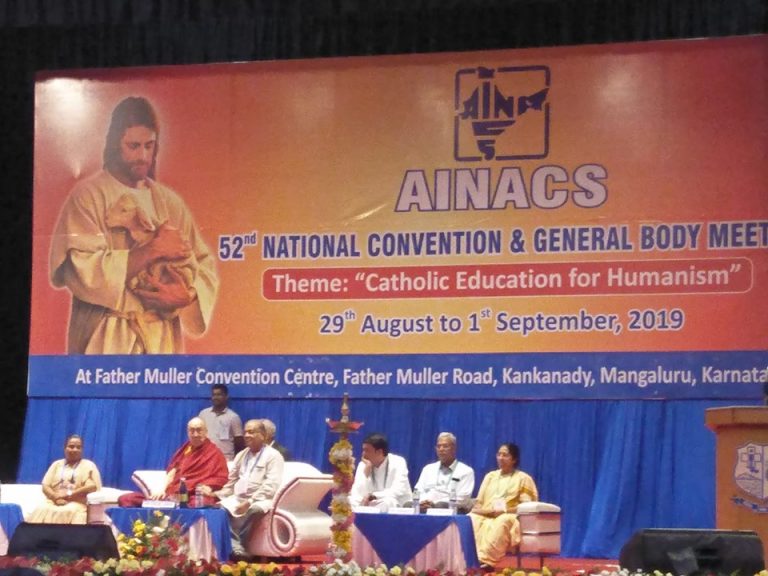 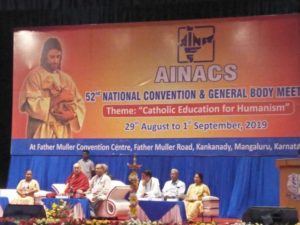 More than ever, the world needs to promote and foster kindness, says Tibetan spiritual leader.

“This is my simple religion. There is no need for temples, no need for complicated philosophy. Our own brain, our own heart is our temple, the philosophy is kindness,” the 14th Dalai Lama said on August 30 while addressing the 52nd national convention of All India Association of Catholic Schools (AlNACS) at Father Muller Convention Centre, Kankanady.

The world faces many issues and challenges. All have to work together for common good. In this regard, promotion of education for one and all is a must, the Buddhist leader said.

The need of the hour is to educate for fraternal humanism among all societies, communities and people to build a civilization of love, he added.

The Dalai Lama’s visit was at the invitation of the AlNACS. He also met with Tibetan college students at a local hotel.

“Catholic Education for Humanism” was the theme of the Conference.

Jesuit Father Zack Karkeba said the main purpose of education is humanism which also involves holistic development of the child. “Education should not be equated with mere academic developments. The human side of Catholic education is also a witness to Christ,” the priest told Matters India.

Father Karkeba also said the members of the association is really concerned about the government’s new educational policy that is in the pipeline, but “many are not aware of its implications as they have never read the draft.”

The meeting had an agenda to discuss the Education policy, but the designated resource person could not attend the meeting at the last moment due to illness.

The main objective of the AlNACS is to promote education according to the ideals of the Christian community and in the interest of National development.

It coordinates the work of members at the National, State and local level in order to foster a common policy of education. It represents the interests of members before governments, universities, educational departments and other authorities concerned. Membership to the society is open to all educational institutions, associations and organizations under Catholic management.

AlNACS is affiliated to the International Catholic Educational Organisation (OIEC), a non-governmental organization representing world-wide Catholic education as an NGO.