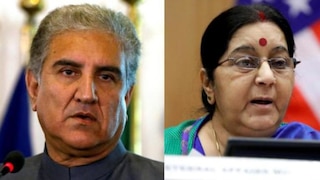 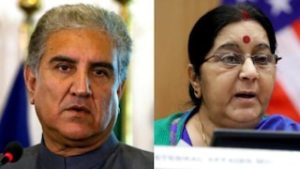 “I have spoken to the United Arab Emirates foreign minister and have expressed my reservations over her invitation. I have made myself clear that India has shown aggression, Shah Mehmood Qureshi said.

Foreign Minister Shah Mehmood Qureshi on Wednesday expressed reservations at Organisation of Islamic Cooperation (OIC) after the latter extended an invitation to Indian External Affairs Minister Sushma Swaraj to be the guest of honour. He also exerted pressure at OIC to withdraw the invitation to Sushma Swaraj.

Sushma Swaraj has been invited as a “guest of honour” at the inaugural session of the foreign ministers’ conclave in Abu Dhabi next month.

Speaking on Geo News show, Aaj Shahzaib Khanzada Kay Sath, Mehmood Qureshi said, “I have spoken to the United Arab Emirates foreign minister and have expressed my reservations over her invitation. I have made myself clear that India has shown aggression.”

“Under the current circumstances, it will not be possible for me to attend OIC meeting where Sushma Swaraj is present,” Qureshi said.

On Tuesday (February 26), Pakistan had decided to engage with the global leadership to “expose India’s irresponsible policy” and its breach of the Line of Control (LoC).

Shah Mehmood Qureshi had on Tuesday said that India’s “LoC breach” would be raised at the Organization of Islamic Cooperation (OIC), the United Nations (UN) and among friendly countries. However, after the OIC extended an invitation to Sushma Swaraj to be the guest of honour, Pakistan withdrew from it.

Earlier in the day, the United States of America asked Pakistan to urgently take “meaningful action” against terrorists based on its soil. The response from the US comes a day after the Indian Air Force conducted airstrikes against camps of terror outfit Jaish-e-Mohammed (JeM) in Balakot, Pakistan.

US Secretary of State Mike Pompeo, in a statement, said he has communicated to the Pakistan foreign minister about the “urgency of Pakistan taking meaningful action against terrorists groups operating on its soil”.