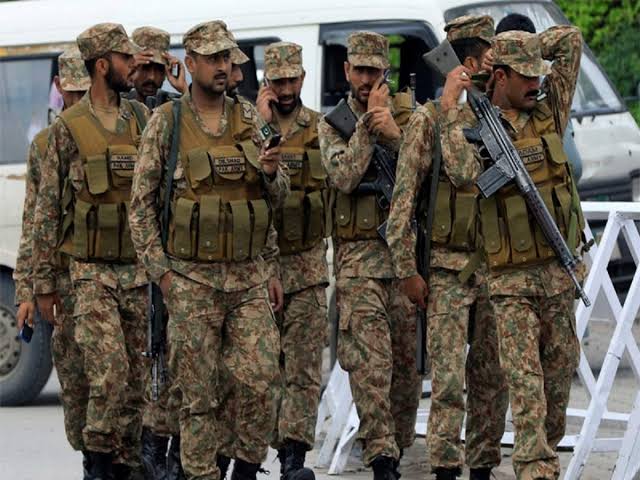 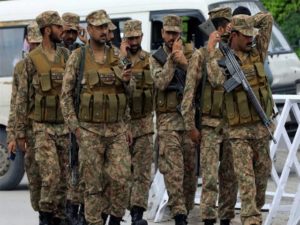 Gulalai Ismail’s elderly parents said they were ordered to come outside “just to talk,” but refused. The security men eventually left after nearly an hour.

“I told them you have weapons in your hands and no uniform — I won’t come out,” said Ismail’s father, Mohammad, a retired professor living in the capital of Islamabad.

Raids like this are part of an expanding push by Pakistan’s security services to crack down on anyone who voices criticism of their activities.

Gulalai Ismail’s parents are facing charges of financing terrorism, allegedly for funneling money from their daughter toward terrorist activities. They deny the charges and are currently out on bail but have been ordered not to leave Pakistan.

Their daughter went into hiding for several weeks after her criticism of the Pakistan army and its powerful intelligence made her a target. Last month she surfaced in the U.S. seeking asylum.

The family supports an ethnic Pashtun movement known as the PTM that is stridently critical of the army’s war on terror, particularly in the country’s border regions. Millions of people have been displaced from those areas, and thousands of mostly young men have disappeared, often after being picked up by security forces.

While Gulalai Ismail was criticized and even arrested for her support of the PTM, her father said the real trouble began when she criticized the security forces of sexually harassing and abusing women in the tribal regions, particularly Pakistan’s Waziristan region.

“In Waziristan, young girls told stories of how army and non-state actors are harassing young girls and women,” her father told The Associated Press. “She returned saying: ‘My job should be to help women who suffer sex abuse in conflict.'”

Mohammad Ismail, who taught Urdu literature, is a self-avowed communist who traces his activism back to the 1980s. At the time, he opposed Pakistan’s military dictator Gen. Mohammed Zia-ul Haq, whjo worked with the U.S. to fund, arm and train the Islamic militants fighting in neighboring Afghanistan against the former Soviet Union. Some of those fighters, including Osama bin Laden, would eventually go on to form al-Qaida.

Ismail also drew the ire of the Taliban, another hard-line Islamic militant group born out of the war in Afghanistan. His house was ransacked several years ago in retaliation for his criticism of the group’s activities in his home province of Khyber Pukhtunkhwa, which borders Afghanistan.

Activists with the PTM charge that Pakistan’s military and intelligence agencies harass and intimidate ethnic Pashtuns who are critical of the war on terror. They also claim the Pakistani government continues to separate insurgents into “good” and “bad” Taliban.

Pakistani security services are still undecided about whether to break all ties with groups they have long considered “assets,” particularly against neighboring India, Pakistan’s longtime nemesis.

In an earlier written response to questions from the AP, army spokesman Gen. Asif Ghafoor dismissed allegations of turning a blind eye to some Taliban militants while fighting others.

“Pakistan Armed Forces have undertaken military operations against terrorists of all hue (and) color,” Ghafoor said. He asserted that military operations in the mountainous border regions since the early 2000s had simply targeted the most dangerous groups first, followed by those that pose less of a threat to Pakistan.

But Gulalai Ismaili, her father, the PTM and other human rights organizations in Pakistan disagree.

Bushra Gohar, a politician and human rights activist, was among the women activists who went to Waziristan. She said the stories of abuse were harrowing.

“Several women and girls narrated horrifying stories of sexual harassment, threats and intimidation by the security forces,” she told the AP.

“One woman had kept a record of the security forces breaking into her house for illegal searches and terrorizing her family in the absence of male household members by drawing a line on a piece of paper for each visit. She showed the paper to us and gave a video statement,” she said.

Ghafoor, the army spokesman, did not directly address the accusation of sexual abuse but denied human rights violations.

Human Rights Watch is among the many organizations who have spoken out in support of Gulalai Ismail, whom the spokesman said faces charges of “using derogatory language against the state institutions.”