Home Uncategorized Telangana Liberation Day: Did the Nizam have a secret deal? 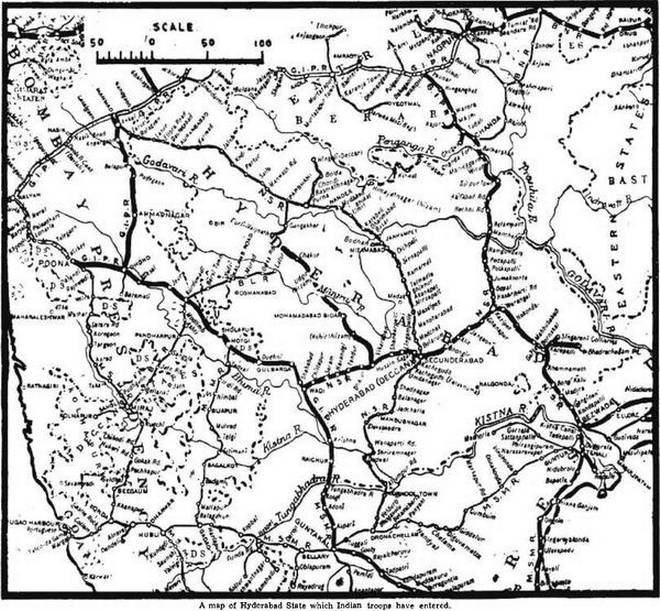 Secret cables between U.S. and U.K. diplomats show the Nizam and GOI played the endgame of the Asaf Jahi empire

As Indian forces surrounded Hyderabad and moved in on five fronts in September 1948, the United States and British diplomats suspected that the Nizam Mir Osman Ali Khan and the Government of India had choreographed the operation.

“Embassy feels, although it has no definite evidence in support its conclusion that whole military campaign and consequent capitulation (of) Nizam was to (a) certain degree (a) prearranged plan between Nizam and El-Edroos (Maj. Gen. Syed El Edroos commander of Hyderabad forces) on one hand and GOI officials on other,” was the secret telegram sent to U.S. Secretary of State George Marshall by Charge in India Howard Donovan during those crucial days.

While Indian Independence on August 15, 1947, was a heady affair for the rest of the country, Hyderabad under the Nizam Osman Ali Khan hedged his bets. Hyderabad had to deal with a fog of war for 13 months before the ‘Police Action’ began on September 13, 1948. ‘What will the Muslim ruler with a majority Hindu population do in the heart of India?’, was the big question. The Nizam’s Dominion sprawled over 82,698 square miles an area bigger than Scotland and England put together.

The inevitability of the accession of Hyderabad was correctly read by the British diplomats. “…to say that the vast majority of disinterested opinion, both in this sub-continent and outside, accepted the Government of India’s contentions that Hyderabad’s accession to the Indian Union was not only inevitable but an indispensable pre-requisite to the consolidation and welfare of the Union as a whole,” informed A.C.B. Symon, the British Deputy High Commissioner in India to his diplomats.

While the cable appears guarded in its outline, in a private conversation with his American counterpart, Symon spelled out his understanding of the situation. Based on this conversation, the U.S. diplomat sent a telegram to Marshall on September 15 at 2 p.m.: “U.K. High Commissioner said today he did not consider it beyond bounds of possibility that there was “a deal” between Bucher (Chief of Army Staff General Roy Bucher) and El-Edroos. Bucher told Symon that to date Hyderabad State troops had withdrawn when GOI forces appeared. However, Symon emphasises his comment is pure speculation. He agrees with Embassy that the next 48 hours will be critical and that unless Hyderabad resistance increases during that period there will probably be very little trouble.”

The role of Major General El Edroos in reaching an understanding without much violence is borne out in his biography. “According to my instructions, the Hyderabad Armed Forces had fallen back without offering any resistance and had done so in an orderly fashion,” wrote Major General Syed Ahmed El Edroos as the war wound down. This was perhaps the reason why the war toll was low with Hyderabad losing about 1400 soldiers and India’s toll, never revealed, but is said to be in low double digits.

“Publicly Nehru was very much against military action in Hyderabad. But he was writing letters to Defence Minister Baldev Singh to prepare troops and weapons for action,” says historian Narayani Basu who has written a biography of V.P. Menon. Menon was a key player in the integration of Indian States with a ringside view as Secretary to the Government of India in the Ministry of the States.

Indian Prime Minister Jawaharlal Nehru admitted as much when he separated the Nizam from the claque surrounding him. “For over ten months, the Government tried to bring about an amicable settlement with the administration of Hyderabad. But there were certain forces which were in power, which consistently thwarted all attempts at bridging the gulf of difference between the Nizam and the Government,” Nehru said while addressing a large gathering at Chowpatty in Bombay on September 15.

By September 17, the independent existence of Hyderabad Dominion was over.