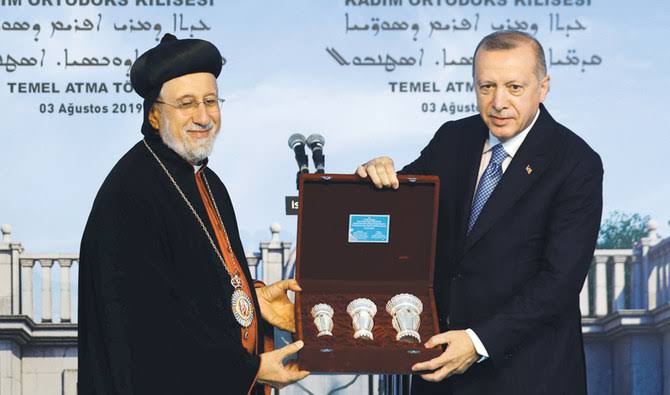 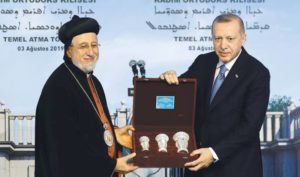 ANKARA: President Recep Tayyip Erdogan on Saturday laid the foundation stone for the first new church in Turkey since it became a modern republic in 1923.
The church in the Istanbul suburb of Yesilkoy will serve the 17,000-strong Syriac Christian community, which is also paying for the new building.
“It is the Turkish republic’s duty to meet the need for space to worship for the Syriac community, who are the ancient children of this geography,” Erdogan said during the stone-laying ceremony.
Syriac Christians are part of the eastern Christian tradition and pray in Aramaic, which Jesus is believed to have spoken.
Erdogan said he hoped the construction of the Syriac Orthodox Mor Ephrem Church would be completed within two years.
He had ordered the Istanbul metropolitan municipality to find space for the building in 2009 while he was prime minister.
It is being built on land belonging to the Latin Catholic Church and which is part of an Italian cemetery, the head of the Beyoglu Virgin Mary Syriac Orthodox Church Foundation in Istanbul, Sait Susin, said.
In recent years, Turkey has restored and reopened churches but the government has been criticized for trying to Islamicize the official secular country.
Christian minorities including Armenians have also complained of being treated as second-class citizens in the Muslim-majority country.
Christians make up around 0.2 percent of the total population in Turkey.

The new church is being built on land belonging to the Latin Catholic Church and which is part of an Italian cemetery, the head of the Beyoglu Virgin Mary Syriac Orthodox Church Foundation in Istanbul.

But Erdogan sought to extend a hand to other communities in the country of 82 million, saying “don’t forget, this country, this state belongs to everyone.”
“Anyone who has affection for, contributes to and is loyal to Turkey is a first-class citizen. There are no barriers to anyone in politics, trade or any other area.”
Official statistics show 98 percent of the Turkish population is Muslim but a poll by Konda group earlier this year showed the number of people identifying as atheist rose from 1 to 3 percent between 2008 and 2018.
In the same survey, 51 percent said they were religious in 2018 compared with 55 percent in 2008, although the number of those who said they were a “believer” rose from 31 percent to 34 percent in a decade.