Home Uncategorized Why UN should act cautiously on the Russell Tribunal on Kashmir! 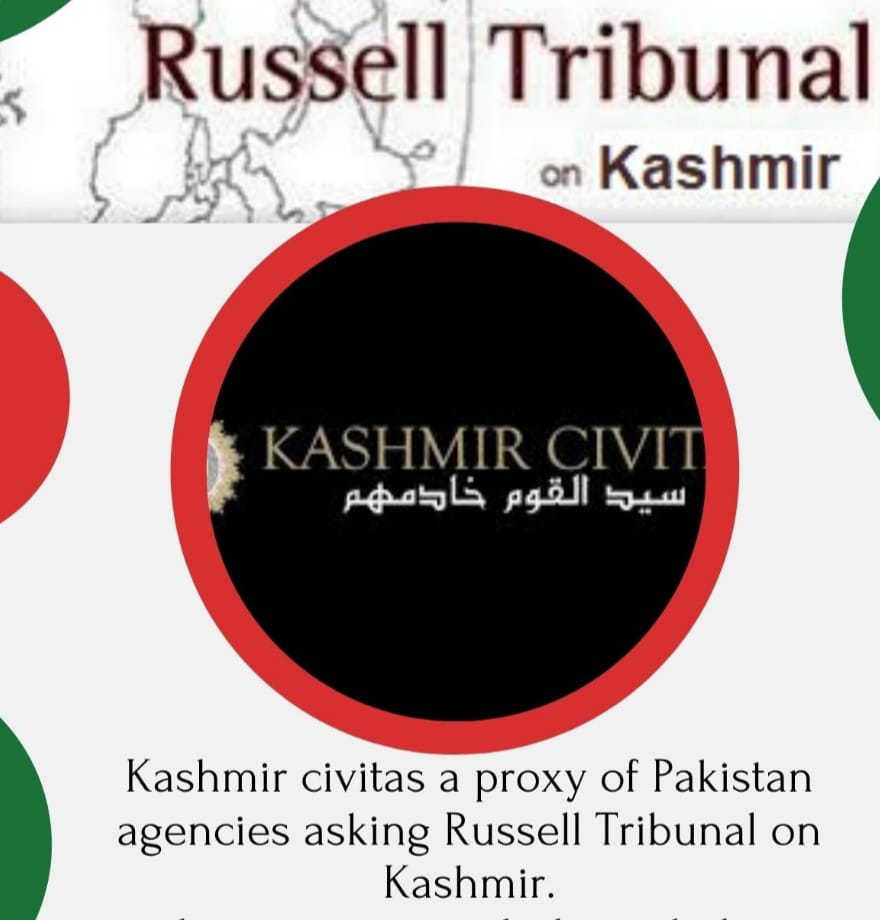 International community in general and the UN bodies in particular must act cautiously while dealing with the tribunals like this…….

A Canadian-registered NGO, Kashmir Civitas partnered with the Russell Foundation in London, the Permanent People’s Tribunal of Bologna, the International University of Sarajevo (IUS) and the Center for Advanced Studies at the University of Sarajevo to hold an event on Kashmir on December 17-19, 2021. It was reportedly a foundational international event, and the first of many tribunals being planned for the coming years, as stated by Farhan Mujahid Chak, secretary-general of Kashmir Civitas. The event was convened with an aim to “highlight oppression and suffering in the region that has been the source of decadeslong tensions between nuclear-armed neighbors Pakistan and India”. Both academics and civil society representatives took part in the Russell Tribunal on Kashmir convened in Bosnia-Herzegovina’s capital, Sarajevo.

Look at the key words that were repeated in the Russell Tribunal on Kashmir: ‘Decolonization’, ‘settler-colonialism’, ‘crimes against humanity’, ‘genocide’ and ‘nuclear threats’ emerging from the disputed territory. These blatantly one-sided, clearly biased and run-of-the mill cliches were made at the inaugural session of the tribunal that sought to draw ‘global attention towards the atrocities committed in the Muslim-majority region’.

Tellingly, in the conclusive session, the Russell Tribunal on Kashmir has called the UN to implement its recommendations. The final statement of the judges of the tribunal goes like this: “The situation in Jammu and Kashmir is a serious matter of concern for the whole of humanity as genocide and rape, unlawful detention and forced mass blinding, and other crimes against humanity are being used as weapons of war”.Furthermore, the Russell Tribunal called upon the United Nations to properly oversee the ‘de-colonialization process’ in Kashmir. “Just as the United Nations intervened and found that Britain had not properly completed the decolonization process in the Chagos Archipelago in the 1960s, it could offer a similar intervention vis-à-vis Kashmir”, the Tribunal opined. It also asked the United Nations General Assembly to request an advisory opinion of the International Court of Justice to characterize the Kashmir situation as an uncompleted decolonization process and to recognize the legal force of the Security Council’s resolution calling for a plebiscite of the people of Kashmir in order that they may determine their future.

Now the question arises out of this whole excercise on part of the Kashmir Civitas, as to why the United Nations would implement the recommendations of Russell Tribunal on Kashmir, and whether why should the UN even entertain the evidently partial and prejudiced tribunal, which goes only in favour of the Pakistani propaganda and ill conceived rhetoric?

Not long ago, the concept of “Responsibility to Protect” was introduced in the International Law in response to humanitarian crises the world has been facing in post-cold war era. First proposed by a commission convened by Canada in 2001, it was then approved in the United Nation’s 2005 World Summit Outcome, and through UN Security Council and General Assembly resolutions. It is the doctrine of United Nations according to which UN has assured responsibility to ensure peace throughout the world under the International Humanitarian and Human Rights Law. But it confers a collective responsibility on the international community only when there is a threat of genocide, war crimes, ethnic cleansing and crimes against humanity. It doesn’t allow the international human rights bodies to take side of one particular country or group in a conflict zone or disputed territory. But Kashmir should no longer be treated as a disputed territory between India and Pakistan. Rather, it has now become a matter of personal prestige for Pakistan after the Indian government has revoked the temporary special status of Jammu and Kashmir on August 5, 2019. After all, the abrogation of Articles 370 and 35A, being temporary provisions, was long overdue. The decision on part of the Parliament of India was in full synergy with its sovereign and legal right and therefore it could not be challenged.In this context, it is not difficult to understand why the pro-Pakistan international bodies are flagging the Kashmir issue as the biggest concern in South Asia for the United Nations since the abrogation of the Article 370.

The recommendations of the Russell Tribunal on Kashmir are wholly based on the premise that the valley of Jammu and Kashmir is prevailing under the shadow of anarchy, chaos, insecurity, disorder and uncertainty. But the international observers can’t live in oblivion to the overall development and growth rates in education, agriculture, sports and life expectancy in the state during the last two years, despite the ravaging and atrocious pandemic. Even in the Covid 19 vaccination drive, Jammu and Kashmir fared much better than other developed states in India.

As a matter of fact, the developmental mechanism and the progressive Indian moves have proved to be the proverbial final nail in the coffin of Pakistan’s feeble Kashmir rhetoric. As a result, its allies in the international arena got so rattled that they have started tilting at windmills.On the other side, Pakistan couldn’t have achieved anything in its image makeover on the flagrant human rights violations in the so-called ‘Azad Kashmir’ and Gilgit Baltistan, despite the international reminders. Thus, it has sponsered the foreign organizations like the Kashmir Civitas to perpetuate a series of reactionory initiatives and events such as the Russell Tribunal on Kashmir.In fact, in the long run, the fabricated rhetoric of Pakistan will only further strengthen India’s logical and legal stand on the Kashmir issue. The unbiased international fraternity cannot be kept in the darkness. Much of the world has dismissed and invalidated Islamabad’s fallacious narratives on the ‘Muslim genocide’ in Jammu and Kashmir.

By refusing to entertain Islamabad’s request for holding a meeting on the abrogation of Article 370 on the plea that this decision violated UN resolutions on Kashmir, the United Nations Security Council has also sent out a clear message to the world.In April 1948, the UN adopted UN Security Council Resolution 47 on the resolution of the Kashmir issue. Since then, Pakistan and pro-Pakistan lobbies among the international human rights bodies have been trying to spread misinformation. The Russell Tribunal on Kashmir is nothing short of the same attempt with the clear intention to aggravate the issue which was almost on the verge of conclusion.

The international community in general and the UN bodies in particular must act cautiously while dealing with the tribunals like this. It must not heed the prejudiced and erroneous Kashmir-related recommendations based on unfounded grievances, and full of factual inaccuracies in stark contradiction with the ground realities in the valley. In any case, there are no war crimes, impunity or an apathy in the developing Union Territory of Jammu and Kashmir that should require a UN intervention.