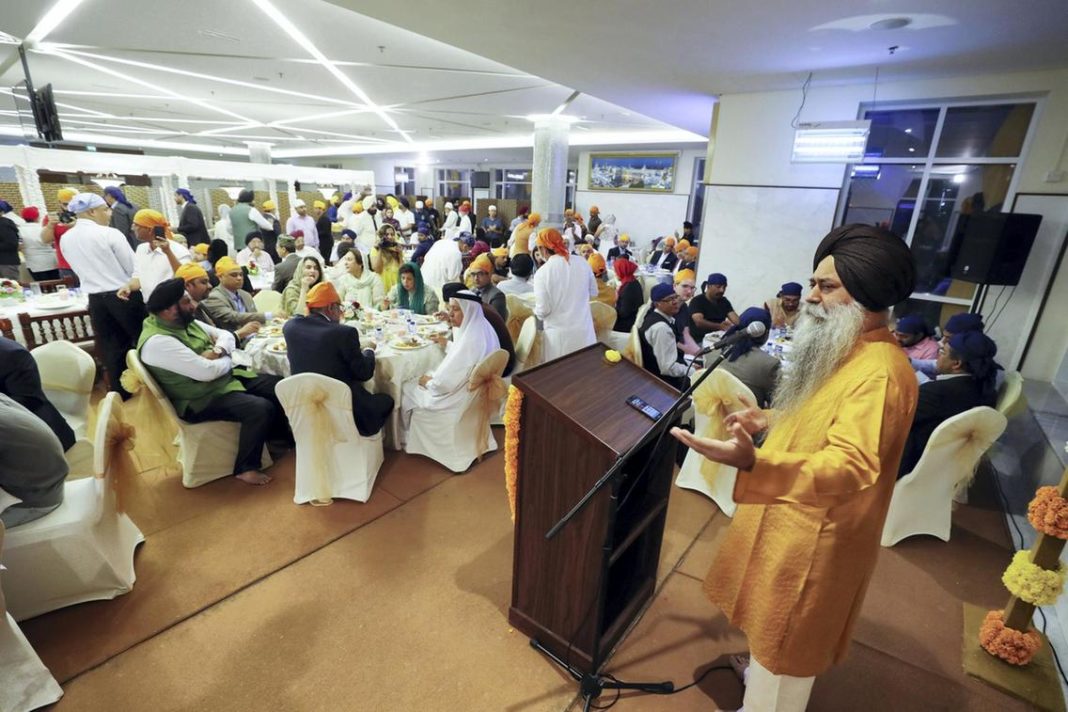 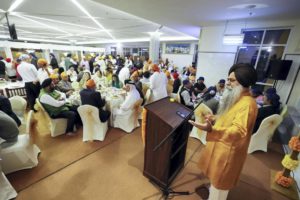 An interfaith iftar held at a Sikh temple in Dubai was described as a perfect metaphor for the UAE’s melting pot of religions.

More than 200 members of the Muslim and Sikh communities took part in an event at the Gurunanak Darbar Sikh Temple in Dubai on Wednesday evening.

The temple, in Jebel Ali, has an estimated 50,000 members. It was opened seven years ago to meet a demand from the Sikh community for a permanent place of worship in Dubai.

“I have been coming here for years and every time I visit I am overwhelmed with gratitude,” said Raziya Sharif, a Muslim from Pakistan.

“I have always been made welcome. It’s such a special place, especially during iftar.”

The temple has held one multifaith iftar each Ramadan since it opened its door in 2012 – this year they have increased that to one every night.

The temple caters for 2,000 daily visitors with that number reaching 15,000 on Fridays.

“I have a daughter doing exams in Philadelphia so I am saying a prayer she does well.

“I always come here to pray because there is a special peace that prevails here and it can be emotionally overwhelming in a good way, from a spiritual point of view.”

Indian-national Simran Thawani, 40, has been coming to the temple since it first opened in 2012.

“I bring all my family here and my three boys learn here because there is a simple harmony in the temple,” said Ms Thawani, a HR manager.

“I feel that events like tonight are required in this part of the world.

“It is beautiful to see different communities coming together and we might not have experienced it otherwise.”

Also attending the iftar was Ammar Al Banna. The Egyptian Muslim works as a lawyer in Dubai.

“This is a great place where people of all faiths can come together,” said the father-of-three.

“I often bring my children here because it gives them the opportunity to experience new cultures and it is important that future generations have that experience.

“There are cultures coming together here and that is a crucial part of Islam and the teachings of the Quran.”

He was accompanied to the iftar by his fellow lawyer, Reema Ashraf, 40, also a Muslim.

“A lot of people always talk about the many differences between religions,” said the Pakistani national.

A lot of people always talk about the many differences between religions. But tonight is about what we have in common and sharing that sense of oneness with each other

“But tonight is about what we have in common and sharing that sense of oneness with each other.”

Angad Jaspal, a 33-year-old Indian, told The National that the event was a reflection of the cosmopolitan nature of modern Dubai.

“It is important to have different communities mingling with each other,” he said.

“It shows that everyone is equal and there is no place for inequality regardless of where you are from or what your religion might be.”

Bubbles Kandhari, vice chairperson of the temple, said the “response from all communities has been absolutely fabulous so far”.

“We have more than 200 people here tonight and have been averaging about 40/50 people every other night.

“It’s important to open our doors and welcome others. That is especially the case during the Year of Tolerance here in the UAE.”