Home Career SRK cooks food for his kids at 3am, BELIEVE IT OR NOT! 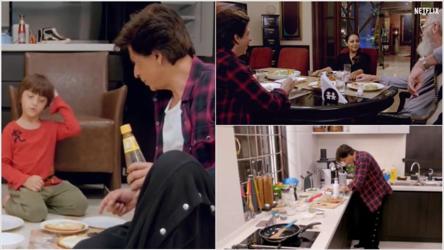 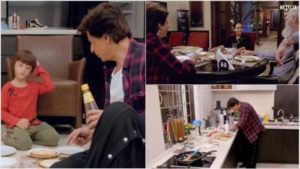 Shah Rukh Khan may be the world’s biggest star but he is also his kids’ go-to person for late night hunger pangs. In a new clip from David Letterman’s Netflix special episode of My Next Guest Needs No Introduction with the star, he says he cooks fun meals for his kids at 3am.

The promo video shows Letterman shaking hands with Shah Rukh’s youngest son, AbRam. He asks if he could think about ‘furloughing one or two of them’. Shah Rukh jokes, ‘All of them.’ He adds, “But jokes apart, I spend a lot of time with them. They always want food at 2 or 3 in the morning. So I am learning Italian food. So whenever that nine number of the kitchen goes, I say ‘Yeah! What do you want? You want some pasta? And I quickly go and…’” Shah Rukh is seen whipping up some dishes in a kitchen and feeding AbRam something he has just made.

Another clip shows Shah Rukh and Letterman talking to Gauri Khan as they sit across a dining table. Letterman also asks Shah Rukh about the C-gang that he was a part of in school. “We formed a gang in school. We had to wear a white shirt and blue jeans with a C written with your hand here,” he said. The real story behind it will be revealed when the show premieres on October 25.

Shah Rukh shared the first trailer of the show earlier this month. “The most fun I’ve had being interviewed. Thank u so much @Letterman for being so gracious and all happiness. U r a gentleman, sir! Also @netflix & @NetflixIndia for having me over at NY,” he wrote alongside the video on Twitter. Letterman has already hosted Malala Yousafzai, Barack Obama, George Clooney and other big celebs, figures and stars on his show.

Ahead of the conversation, Shah Rukh said: “I’ve watched David Letterman’s late-night talk show for years and I’m a huge fan of his style of interviewing. I’m thrilled, and honoured to share my story with him. That this is on Netflix is even more special – I’m working with the team on various projects and it’s always been exciting partnering with them.”

After interviewing Shah Rukh in front of a live audience, Letterman said: “The best part of this job that Netflix has been happy to provide for me is to meet people. And after each one of these sessions I think to myself, it is a very smart, very lovely person from whom I have learned things. You would maybe be at the top of that list.”