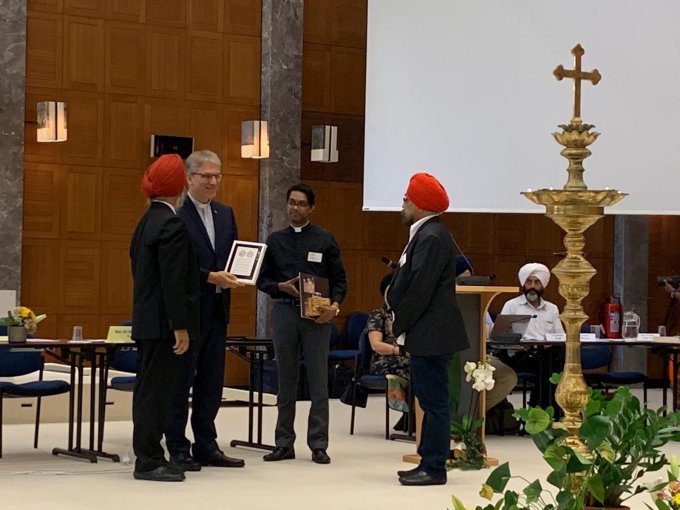 Organized by World Council of Churches, at WCC, Ecumenical Center, Geneva on July 5, 2019

To commemorate the 550th birth Anniversary of Guru Nanak (1469), the first Guru of Sikhs, a historic Christian Sikh Dialogue was organized by the World Council of Churches (WCC) at Geneva on 5th July 2019.

The theme of the dialogue was “Pursuing Peace in a Pluralistic World”. Around 40 religious leaders, scholars and independent activists from around the world, belonging to both Christian and Sikh faith, were invited to participate in this event. The WCC General Secretary Rev. Dr. Olav Fykse Tveit expressed his joy at the initiation of this dialogue, as this marked the first formal bilateral dialogue with the Sikh community.

“This is an important year in the Sikh Calendar as it marks the 550th Birth Anniversary of Guru Nanak,” Tveit said. “Therefore initiating formal encounter between Christian and Sikhs during this year is a special way of commemorating the life and work of Guru Nanak”. Guru Nanak emphasized universal kinship as the highest of religious aspirations and urged his followers to treat all human beings as brothers and sisters. Tveit said. “In a world sharply divided by hate and fear the best way for religions to not be part of the problem, but be part of the solution, is to be part of the solution together.” The Head of Akal Takht Gyani Harpreet Singh also sent his greetings and support to everyone on this historic event. Inderpreet Singh, a Sikh activist from Greater Atlanta, USA and the President of American Sikhi Educational and Empowerment Network (ASEEN) was invited to represent America Region along with his fellow Sikh Scholar S. Gulbarg Singh, a founding member of the Global Sikh Council (GSC). Dr. Iqtidar Karamat Cheema, an interfaith and human rights activists who is also on the United Nations Global Steering Committee on prevention of genocide and atrocities crime called upon all gathered religious leaders to become one and see each other’s issues as their own, only then can we truly become one common humanity, only then can those issues become one common misery and therefore one common action for all of us to take. Dr. Cheema’s recent efforts had made possible the inclusion of select Sri Guru Granth Sahib Texts in the United Nations “Faith for Rights” declaration. It is noteworthy that this is the first time ever any text from Sri Guru Granth Sahib ji has been included in any UN document. Dr. Harshinder Kaur, an international women’s right activist made a fervent plea to take up the cause of women rights especially the rampant female feticide happening all across the world. She gave alarming numbers from the latest UN report that shocked the delegates of how dire situation is. She reminded all the participants of the high status that Guru Nanak attributed to Women – “So Kyon Manda Aakhiye Jit Jamme Rajan” which means “Why call ‘her’ inferior? From her, the Kings are born”. Ms. Teenaa Kaur, an avid environmentalist and women rights activist made passionate appeal to all faith leaders to help nurture the mother earth. She provided some stark ground realities to show the fast deteriorating condition of water and environment pollution current happening especially in the Punjab region and reminded all the importance of the Mother Nature as stated by Guru Nanak and enshrined in the Guru Granth Sahib ji – “Pavan Guru Pani Pita, Mata Dharat Mahat !” which means Consider Air as your Guru, the Water as your Father, and the Earth like your Great Mother. S. Inderpreet Singh who was representing America Region expressed his happiness at the outcome of this conference and told Sikhnet that this historic dialogue focused on a holistic understanding of Nanak’s philosophy of universal brotherhood, equality for all and nurturing of Mother Earth. Mr. Singh further said, “From all the discussions, it was crystal clear that Guru Nanak’s way of life was the solution to all present day evils. All present were also very much moved and encouraged to see leading Sikh Women activists like Dr. Harshinder Kaur and Ms. Teenaa Kaur taking up the mantel of Women’s Right and Environmental issues at the world stage. Just like Mai Bhagoo, it felt that the Sikh Women are again, slowly but surely, taking up the leadership role that they played during the times of our Gurus”. Greatly moved by these two women speakers, the gathered Sikh leaders and scholars pledged to work together for the youth empowerment, women empowerment and environment protection. H E Bishop Miguel Angel Ayuso Guixot, Titular Bishop of Luperciana, President of the Pontifical Council for Interreligious Dialogue in his remarks prayed that the Sikhs continue to remain inspired by the personal example of the founder of their religion so as to become, more and more, authentic men and women who are committed to building peach and spreading joy in our world. He further expressed his sincere hope that give the fact that the theme ‘peace’ is at the core of the teachings both in Sikhism as Christianity, this maiden Sikh-Christian Dialogue meeting organized by the WCC in collaboration with the Sikh organizations will pave the way for greater interreligious engagements in pursuit of peace founded upon “truth, justice, freedom and love” (Pope John XXIII, Encyclical Letter Pacem in Terris, 1963, pp. 265-266). Various Sikh leaders collectively expressed their gratefulness to Rev. Dr. Olav Fykse Tveit and Rev Dr. Peniel Rajkumar who gave their unflinching support in organizing this historic first Sikh Christian dialogue in Switzerland. Every one expressed optimism that this initial step will usher a pathway to peace and harmony in the near future.