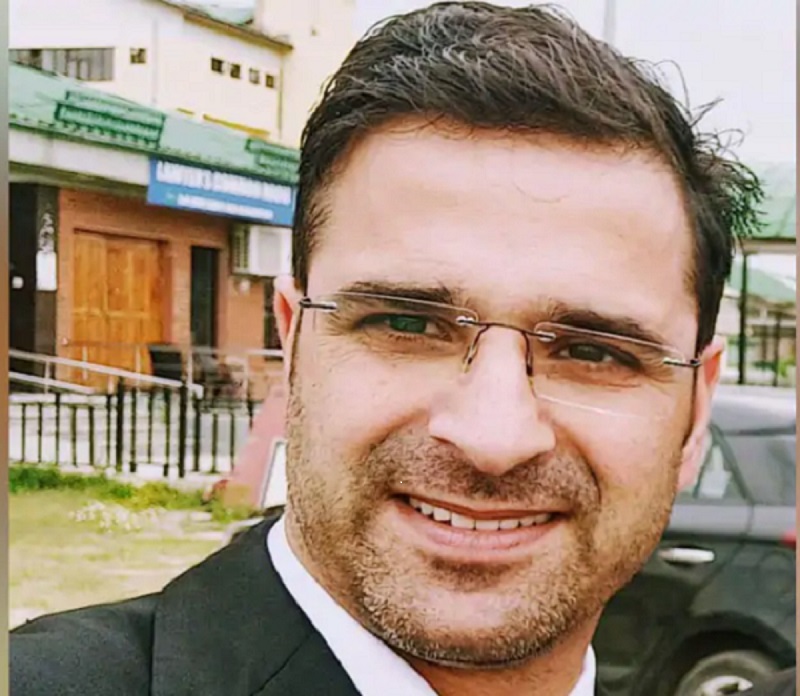 Yet another voice silenced, another family devastated, two little girls orphaned and a young woman widowed. Yes, I am talking about the cold-blooded murder of Advocate Babar Qadri; who became the fresh victim of reckless and faceless violence; ravaging the lives in Kashmir – particularly of those who dare to think, talk and write about the situation in the conflict-torn region – since more than three decades of bloody conflict.

There is a lot more to it than meets the eye.

Qadri was a victim of unbridled violence let loose by the “unknown gunmen” – a cliché which everyone in Kashmir’s political amphitheater, as well as those sitting in New Delhi and Islamabad, use and interpret to express their selective outrage.

Ironically, even when the identity of the killers and their motivations are known and clear, a deliberate attempt is being made to create ambivalence around their identity by calling them “unknown”. And, as if that were not enough, the victims are skewedly labeled to hide the sinister motives behind such killings. “Informer”, “agency man”, “political activist”, “agent” and a whole lot of similar other labels are used to justify the killings. And there are some people among us who prefer to stay silent – a sign of agreement of what’s been done to an innocent and opinionated person – because they don’t want to adopt a neutral approach toward the violent killings in Kashmir.

During the past three decades of political turmoil and violence, countless people fell to the bullets of “unknown gunmen” in Kashmir. In fact, this type of violence – target killings which are never owned by any group or side – is so prevalent in Kashmir today that the term “unknown gunmen” has taken precedence over the killers’ identity. It is really unfortunate that this term has been left open for subjective interpretations, with each side and each individual drawing her/his own inferences about the identity and motivations of killers on the basis of their own political convenience, beliefs and interests.

Even as this type of ambiguity perfectly suits the perpetrators, it has created a precarious situation for the ordinary people and the society as a whole by shielding the killers.

“Like Saturn, the revolution devours its own children,” — a common saying during the French Revolution (1789) — holds true for the land of Kashmir that devoured thousands of innocent lives during the past thirty years. The families of these slain persons still wonder as to what was their fault, why they were killed the way they were killed. But these pleas are either going unheard or deliberately not being heeded.

Worst of all, people in leadership roles have not dared to name and shame the killers, even when the victim happened to be their own kin, sometimes as close as a dear father.

To this day, Mirwaiz Umar Farooq has carefully and cleverly avoided talking about who killed his father Maulana Mohammad Farooq – but why? Mohammad Yasin Malik would, year after year, commemorate the death anniversaries of his JKLF colleagues including Ghulam Qadir Wani, but never ever bothered to utter a word about the identity and intent of their murderers. Sajad Gani Lone called out the killers of his father once but was mysteriously and tactfully silenced thereafter. His brother Bilal Lone did not even muster that minimal courage, though his father’s death landed him a berth on the Hurriyat Conference.

One can go on counting scores of such instances wherein the “leaders” chose calculated and convenient silence, and ordinary public sheepish timidity on each such killing at the hands of the “unknown gunmen”.  This way they accorded the psychotic and sadistic killers an aura of certain divinity, encouraging them to continue their brutalities without any fears of being held accountable.

The social media has given rise to a whole new brigade of ‘rogue elements’, who chip in with their worst biases and prejudices, slant and stereotype, to frame the victim instead of naming and shaming the perpetrator.  This “McCarthyism” is at its best here, even when one can say with absolute surety that none of these trolls may know a thing about Joseph Raymond McCarthy! But their demagogic, reckless, and unsubstantiated accusations, as well as public attacks on the character or the patriotism of those who they perceive as their “political opponents” and who they frame as the ones “working for the agencies” is as ruthless as it is unabated.

All this is very terrifying and frustrating. The fact that mysterious killings have resurfaced here (although they have rarely ceased completely in the past 30 years) with faceless killers roaming scot-free and striking at will is not an achievement for anybody – neither for the state nor for those pitted against it. It is a tragedy for all, particularly the families of these victims who do not know who killed their kin and why – something that they never really get to know.

This violence perpetrated by the “invisible hands” has only aggravated the public anger and a sense of alienation from the system, with every sane human-being demanding that the clouds of suspicion and uncertainty about the identity of the killers be cleared, their aims and motivations unraveled and revealed.

According to reports, the police have set up a Special Investigations Team (SIT) to probe and find the killers of Babar Qadri, but people certainly are not ready to pin hope on the police investigation. And this lack of trust in police investigations is rooted in reality. That is to say, how many investigations of such killings (by so-called unidentified gunmen), which have dotted Kashmir’s bloody history over the years, have been taken to a logical conclusion by the authorities. If people no longer trust such probes and investigations, it is because they have lost faith in the government institutions.

These institutions include police, the judiciary and related agencies, which in any democratic set-up form the bedrock of the state’s correction system. Let’s face it, the track-record of government-agencies in unmasking the “masked killers” is not really very encouraging here.

While the government’s culpability here is often a point of debate, but the hypocrisy of the ‘other side’ and that of the society in general, is rarely discussed for the fear that it might “discredit” something which people are told is the panacea of all pain and agony here.  Instead of taking these “soft target” killings seriously and initiating corrective measures to liberate people from the constant fear of “unknown gunmen”, everybody here, including even the governments, prefer to remain in outright denial mode.

Political expediency aside, such an attitude has not only eroded the credibility of institutions, but it has also imbibed the corrupt and insensitive culture among the insurgents and their handlers, subsequently encouraging more rights violations. Today, when someone tries to put the blame squarely on one or the other group or agency (say state), one wonders why people would buy these claims when the charges are not backed up with any conclusive evidence.

Stories are concocted and spun around to justify violence perpetrated by different actors in Kashmir. The guilty have always been shielded, sometimes through brazen lies and sometimes through outright denial. When the allegations are levelled against the security forces, the state comes to their rescue with a standard catch-line that going against them will dampen their morale. Similarly, when the fingers are pointed at the militants, their mentors waste no time in articulating the tactic of looking other way in the larger “interests of the movement”, and the killers take the task of silencing the new voices implicating them.

As both sides have opted to safeguard the morale of their cadres, they are undermining the morale of the Kashmiri people in the process. Irrespective of how one might articulate the consequences of such an attitude, one can confer without fear of contradiction that the public anger and outrage and hence continued political turmoil here, to a large extent, is also the fallout of the persistent and systematic violation of people’s rights and calibrated denial of the same.