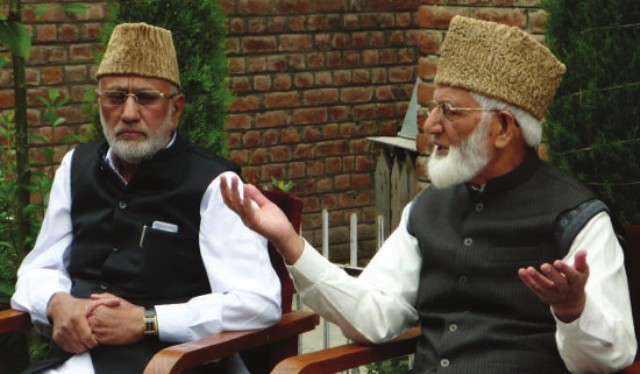 Syed Ali Shah Geelani, the patriarch of the pro-Pakistan separatist movement in Kashmir resigned from APHC on June 29, 2020 through a two page letter. The instantaneous impression was that his parting letter must be based on Geelani’s deteriorating health condition. But, hidden somewhere was the fact that Pakistan terminated his services because he was bickering with his own separatist colleagues and was not fitting into Pakistan’s ‘New Age Strategy’. Geelani, the mastermind of the ”calendar protests” in the Valley in 2008, 2009, 2010 and 2016, when he drew weekly calendars of defiance against the administration, went silent after August 5, 2019. The crackdown on the APHC leaders and their supporters by the NIA had broken the back of the separatists . Also Geelani’s failing health made sure that there was no on-ground activity against the abrogation of Art 370. Subsequently, he became redundant and useless for the agencies of Pakistan.

His two-page letter narrated his “pain & agony” during the last three decades he delivered to Pakistan in Kashmir. His slogan “Kashmir banega Pakistan” agenda based on the reasoning that Kashmir, as a Muslim majority region, should go with Pakistan, lured masses in Kashmir. He shrewdly used the religious sentiment to further his convoluted dream and supported an armed struggle against India which only gave deaths and funerals to Kashmir. Unlike some of his secessionist colleagues, who thrived on the ambiguity, he minced no words when it came to Pakistan. His agenda pushed Kashmir Valley towards radicalization and inspired thousands to pick-up guns and join militancy. This was something which suited Pakistan’s agenda to keep the passions of common Kashmiris on the boil in the name of religion. The fact was that Geelani delivered best to the Pakistan during these decades but his favourite country took no time in throwing him out.

Pakistan agencies wanted APHC to be headquartered in its occupied Kashmir with their choice of leadership, but it was something which Geelani has been opposed to. Interestingly, PoK branch of APHC has ousted SAS Geelani’s trusted people, including a distant relative, Abdullah Geelani there, and this decision was endorsed by APHC/G in Kashmir against the wishes of SAS Geelani. He wanted Abdullah Geelani to take over the reins of APHC in PoK but his wish was ignored and he was sidelined. He also wanted to involve the old and withering Hizb Commanders to be given new roles in politics of ‘freedom movement’ but this was negated by the Pakistani agencies.

With his men being sidelined in PoK, he presumably read the writing on the wall and so decided to embarrass Pakistan globally. History is witnessed to that how Geelani type leaders were made scapegoat by Pakistan agencies. This announcement has not only shocked the followers of SAS Geelani but, it has compelled them to rethink their line of action for the future of Kashmir.

What is ‘New Age Strategy’ of Pakistan?

There are two main reasons for this: one is that Pakistan feels APHC in Kashmir has failed to live up to its expectation, especially after the abrogation of Article 370 and the second is the emerging China factor. If the Pakistani establishment feels it is losing control over the APHC, the China factor has made them change direction. China has been investing a lot of money in Pakistan to further its economic corridor strategy, and the most crucial part of it is located in PoK regions. Locals in PoK have been opposing the Chinese projects, which they claim will destroy their natural resources.

Similarly, Geelani was the one APHC leader, who too is said to have had reservations about China’s growing influence in PoK. It is being said that after the abrogation of Article 370 in J&K, Pakistan too is mulling formal ”annexation” of its occupied region of J&K and China is pushing the idea vigorously. Once Pakistan removes the special status to PoK, the very existence of the separatists and the idea of separatism will die.

Geelani and other separatist leaders will be forced to wind up their shops and Pakistan will work on a new set of people to carry on with the terrorism in India particularly in J&K. Pakistan launched The Resistance Front (TRF), which had cadres from Lashkar-e-Taiba and Jaish-e-Mohammed and simultaneously it started activating and strengthening the APHC in PoK. As per sources various meetings and elections were held in APHC (PoK) which added fuel into the flames and further annoyed SAS Geelani. While Pakistan is redrawing its strategy on Kashmir, Geelani’s letter was an eye opener for the people of J&K and further jolted the establishment and followers of Geelani both in Kashmir as well as PoK.

The corruption debate in APHC camp can be traced back to the 2018 over medical seats in Pakistani colleges. Geelani’s reference to “internal investigation” has to do with the issue of Hurriyat leaders running a racket in Kashmir pertaining to the allocation of medical seats for Kashmiri students in various cities in Pakistan. For over 20 years now Pakistan has offered free seats to Kashmiri students who want to study medicine and engineering. Kashmiri students who failed to gain admission to colleges in India, were on their way to Pakistan, where they had reserved seats for colleges in PoK, Islamabad, Karachi and Lahore. These seats were fully funded by the Pakistani government, which used the Hurriyat, on both sides, to determine the allocation of the seat for these students.

Sources said that these separatist leaders have been selling MBBS seats at Rs 13 lakh and BE seats about Rs 10 lakh over the past years. Geelani’s grandchildren also studied medicine in Pakistan, However, he stopped recommending names for the seats after allegations of racketeering surfaced. The Central Bureau of Investigation (CBI) has filed charge sheets in the cases of Syed Ali Shah Geelani, Abdul Gani Lone and Maulana Abbas Ansari in 2018 in violation of the Foreign Contribution (Regulation) Act, 1976 (FCRA). However, there were no charges against APHC chairman Mirwaiz Umar Farooq. The investigation has suggested that APHC leaders earn at least Rs 80 crores in the last few years!

Geelani’s allegation against the APHC members are being seen as ironical as he himself was one of the biggest beneficiaries of corruption and nepotism. On the other hand various factions of Hurriyat in Srinagar have questioned the seriousness of Geelani’s resignation letter alleging that he is in a state of advanced dementia, to claim the letter is a fabrication by Abdullah. However, family sources of SAS Geelani maintained stoic silence over the development.

After Geelani’s resignation a sense of anger is now seen among common people, not because of his resignation but over the corruption charges in APHC and keeping people in dark. They questioned, how APHC leaders have consolidated massive properties including, hotels, buildings, petrol pumps, resorts, bank balances and admission scam.

The drug trade also came into limelight after the resignation of Syed Ali Shah Geelani however, the topic was dumped and diverted by the Pakistan agencies. The top Police sources disclosed that Kashmir is becoming a new drug destination pumped by the Pakistani agencies through LoC. He added that it is disturbing trend and has deeply disturbed the psyche of common people who’s children become victims of “drug terror”. In past various civil society groups approached APHC-G and APHC-M in Kashmir before the August 05, 2019 development and requested immediate curb against the drugs menace in Kashmir. Subsequently Mirwaiz Umar Farooq appealed from the pulpit of Jamia Masjid, Srinagar against the drug issue and similarly, SAS Geelani warned his handlers in Pakistan if this trade continues then “Allah Hafiz ha”. He also communicated ISI and government through open letters but they paid no heed to his demand.

Is Syed Salahudin next target..

Like SAS Geelani, Pakistan’s another confidant UJC Chief Syed Salahuddin was also warned by Pakistani agencies to restrict his activities but he showed his reluctance. Subsequently, on May 25, 2020 he was attacked in Islamabad for not following the diktat of creating unrest in J&K. Salahuddin faced the ire of his masters when he was attacked by unknown assailants in Islamabad and was grievously injured in the attack and is undergoing treatment. He was targeted near the Hizbul Mujahideen compound in Islamabad .The attack was reportedly planned and executed at the behest of ISI. It was not meant to kill Salahuddin, but to send a message to him and the members of his outfit that they were gradually becoming redundant. The differences between Salahuddin and his ISI handler started ever since the abrogation of Article 370 in J&K in August 2019.

Sources said that since Salahuddin and his outfit were clueless about the Indian government’s move to abrogate Article 370, which granted special status to the erstwhile state of Jammu and Kashmir, the ISI had gradually started withdrawing its support to the Hizbul Mujahideen. After the abrogation of Article-370 Salahuddin was tasked by ISI to carry out a massive attack in the Valley against the Indian government’s move, but he failed to deliver on the ground. Meanwhile, ISI stopped providing adequate training, weapons and ammunition to the Hizbul cadres and started focusing on TRF and Pakistan grown and controlled outfits.

Further, the lack of support to Hizbul in Kashmir weakened his position and after the elimination of top Hizbul commander Riyaz Naikoo by the Indian security forces in an encounter in Kashmir, Salahuddin went on the back foot. He openly criticised the ISI during an interaction with the Hizbul cadres in PoK. After Naikoo was killed, Salahudin had said that Indian security forces’ position in the Kashmir Valley was stronger than militant outfits.

Conclusion: Whether it is Geelani, Salahudin or Mirwaiz, Pakistan is known for its aggression against Kashmiri leaders and vocal voices. The killing of Mirwaiz Mohammad Farooq , Abdul Gani Lone and intellectuals like Shujaat Bukhari would also serve as an example for the generation to come that, Pakistan would not tolerate any voice against it, coming from the valley. Indigenous Militant and separatist outfits of Kashmir also need to review their course of action as Pakistan will only support those who will only raise the slogan “Hum Pakistani hai…. Pakistan Humara hai”.