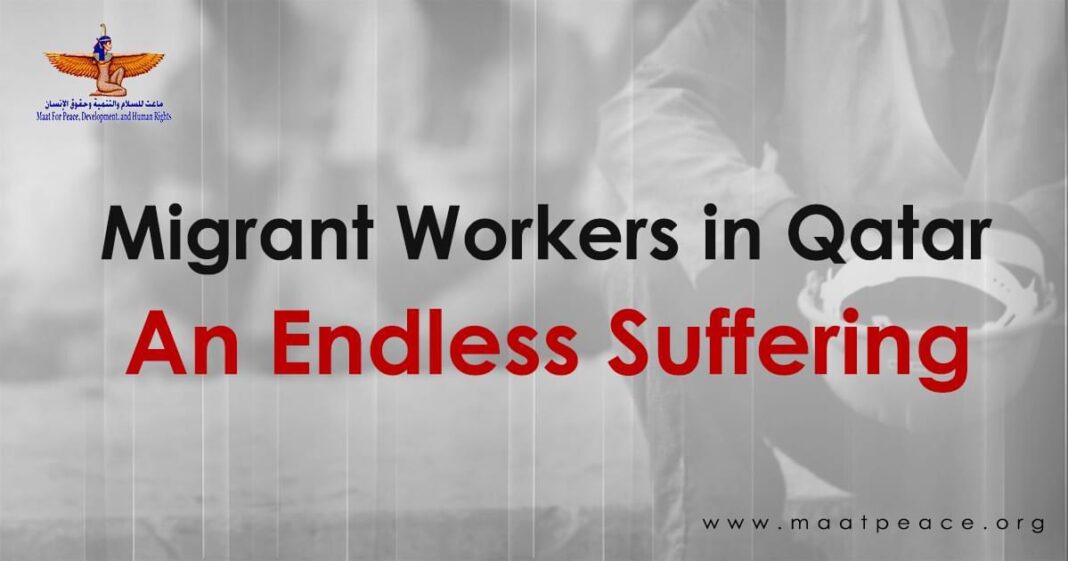 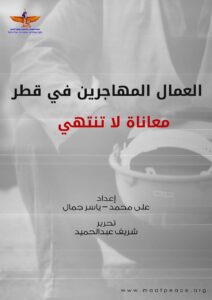 Okeil: The Coronavirus pandemic has increased the suffering of migrant workers in Qatar

Maat for Peace, Development and Human Rights has released a new report entitled “Migrant Workers in Qatar. An Endless Suffering”, which sheds light on the tragic conditions and suffering of the migrant workers in Qatar since the country was appointed to host the FIFA World Cup 2022 in December 2010.
The report highlighted the numerous violations that migrant workers in Qatar are subjected as well as the poor and inhumane working conditions that jeopardize their lives.
Laborer toil under the scorching sun of the desert which temperature may reach 50 degrees Celsius at many times, for long periods ranging from 12 hours to 18 hours daily, for only $ 6 per day, which are often delayed. They are packed into over-crowded, non-human labor camps in the desert, lacking access to all basic services such as clean water, sanitation, and electricity, and many of them have contracted diseases. On the top of that, they are exposed to the risk of forced labor, and restrictions on their movement. They can’t change jobs without the permission of the employer, and they get criminalized if they tried to “escape” from work, and sometimes their passports get confiscated.

Ayman Okeil, head of Maat, said that the Covid-19 pandemic has even exacerbated the suffering of migrant workers in Qatar.

The overcrowding buses, that contain up to 60 laborer, the cramped labor camps into which workers are packed, with up to 10 persons in a single room, as well as the lack attention to safety measure at construction sites, the non-adherence to social distancing, and the poor sanitation, have all created an environment conducive to the breakout of the virus
For his part, Sherif Abdel Hamid, Director of the Research and Studies Unit at Maat, said that 87% of the violations that migrant workers face in Qatar are either related to unpaid or late wages, which affected about 12,000 migrant workers in the State of Qatar in the period from 2016 until the end of November 2020.

Abdul Hamid added that despite the Qatari government’s claim to introduce some reforms to labor laws, there is no government oversight over the implementation of these laws, especially in light of the absence of inspection by Qatar’s Ministry of Labor on construction sites, which makes these reforms mere ink on paper.