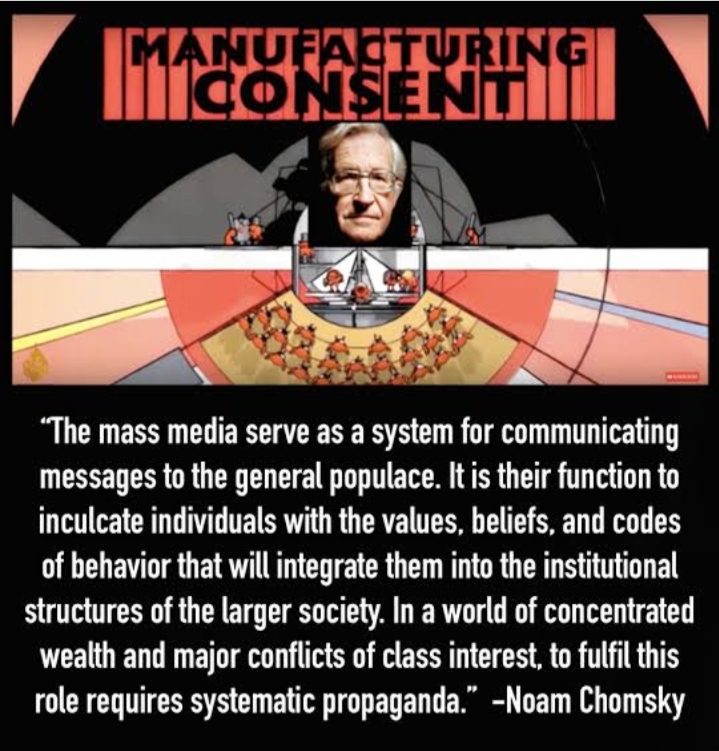 Mass media is the system used to communicate to the general public ,a technology which reaches the masses, forms opinion, creates trends, sheds light on social issues , inculcates in individuals belief system and codes of behaviour to integrate them into the society.
Mass media creates what Antonio Gramsci referred to as Common sense which is not the same as “good sense” .
Senso commune which translates into sense held in common..
Gramsci in his notebook reflects on the almost insidious nature of this common sense , “it’s shifting and almost often contradictory nature” , how it becomes accepted beyond question.

The media follows a propaganda model as described by Noam Chomsky and E.S. Herman which instead of acting as check on political power are infact in bed with them:
The media constructs or manufactures consent.
They are used as instruments to keep the masses in line and maintain the status quo of the 1%.

They are 5 filters which according to Chomsky is applied on the news:

1.The size , concentrated ownership and the profit driven orientation of the mass media:

They argue that the dominant mass media outlets are large monopolistic companies which operate on profit thus they cater to the financial interest of the owners.
Critical Journalism loses its top priority and is replaced by anything that guarantees viewership and Profit.
90% of the American media is controlled by the 6 media conglomerates : Comcast, News Corps, Disney, Viacom, Time Warner and CBS

During the Cobra post operation 136 reveals the bigger the media house the greater was the willingness to carry promotion for hindutva agenda for large sums of money.
Big giant houses like Times of India, India today, Zee news, Hindustan Times and Dainik Bhaskar were on the list of Shame.
This shows that what drives the organisation is not truth to power.
But money over truth.

Advertising as the primary source of income of the mass media:

Media costs millions. The cost is more than what can be paid off by the customers.
Here is where the advertisements come in.
Companies, brands require an audience to sell their products to.
Thus the media not only treats us as customers to cater too.
We are more importantly the products they sell the Advertisers to – Audience.

To put it in perspective:
2018 broadcast audience research council ( BARC) between November 12 to 16th reported 22,099 insertions(ads that aired on TV) by the BJP.
The party ranked 1st followed by Netflix.

Journalism cannot be a check on power because the system encourages complicity.
Complicity with the government, the brand’s, the paymasters.
The mass media is drawn into symbiotic relationship with the Power’s that be.
This is because the media needs a steady flow if raw material for news
The Government and Corporate sources are seen as easily recognisable and credible sources of news.
This exclusive scoop stories, expert opinions builds the news “narrative” and create the bias.

“Those in power and those who report on them are in bed with each other”
Indian context two names
Sambit Patra and Arnab Goswami
And Navika Kumar’s guiding light.

4.Flak
Flak refers to negative response to a media statement .
If these goals are produced on a large scale they tend to be costly to the media.
Flak is a means to keep in check any journalism which aims at challenging the power structure.
They are swiftly pushed to the margins through various agencies.
Whistleblowers are hounded and discredited.