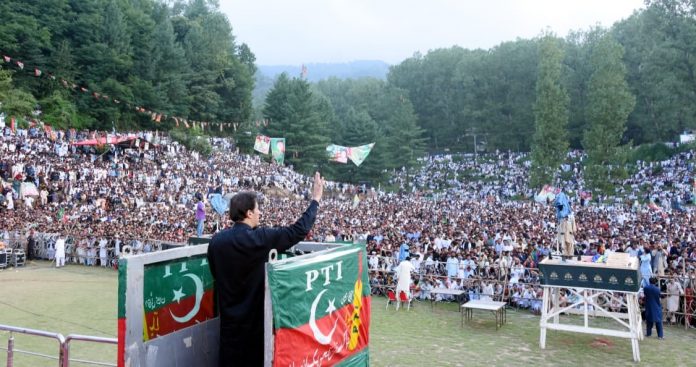 It’s election time in what the Pakistanis like to call ‘Azad Kashmir’ — that thin slice of territory that is meant to showcase Kashmiri ‘independence’. It’s a different issue that it’s not independent at all, and that its legislature has the powers equivalent to a District Magistrate in India. But the pretense is maintained, once every five years, glamorous political leaders descend on Muzaffarabad, give speeches, and disappear, not to be seen again till the next round. It’s all rather delicious irony, given the beating of Pakistani political chests on self-determination in Kashmir.

The Azadi of ‘AJK’ elected bodies

For the uninitiated, ‘AJK’ is a territory of about 13,000 sq km that was once part of the kingdom of the Maharaja of Kashmir, as is the rest of what we call PoK ( Pakistan-occupied Kashmir), which includes the much larger over 72,000 sq km of Gilgit Baltistan.

A hugely strategic area since British times, Islamabad quietly divided PoK into two through the still secret Karachi Agreement 1949, in complete violation of UN Resolution 47.  Essentially, the ‘Azad Kashmir government’ handed over 12 subjects, like defence, foreign policy, and the coordination of all affairs of Gilgit Baltistan to Pakistan. In other words, ‘Azad Kashmir’ found itself a quarter of its former size, without any consultation with its own people. Subsequently, the basics of a presidential, and later a parliamentary system were set up, which meant a president, a prime minister, a legislative assembly etc, all of which sounded fine on paper. In reality, actual power resides with the Prime Minister of Pakistan, who chairs the upper house called the Kashmir Council in Islamabad, which is dominated by establishment cronies. The Council decided on everything from publication of newspapers to the appointment of the auditor general, leaving the legislative assembly with basic day to day running of the state. It does levy taxes, but tax officials are appointed by Islamabad.

In 2018, the outgoing Nawaz Sharif government tried to overturn this state of affairs with the Thirteenth Amendment, which quietly transferred the huge powers of the Council to the legislature and changed the terminology of ‘Interim Constitution’ to just ‘Constitution’. That would have given ‘AJK’ a certain independence. Then, Imran Khan’s government reacted with a hammer that was the Fourteenth Amendment in 2020. It took away even the few powers of the state, and indeed banned the use of the word ‘state’ at all. Among other changes, a new clause allowed any bill passed by the Council to become law, without the assent of the ‘President’ of PoK, completely eroded judicial autonomy, and further restricted political activity. It was virtual annexation, and was opposed ‘in totality’ by the Cabinet of ‘AJK’, but the legislative assembly was reported to have accepted it in December 2020. So, as of now, the ‘AJK’ legislative assembly is completely toothless. And it is to this body that elections are being fought. One wonders why anyone even bothers.

It is this sad travesty of a democratic institution that is going to elections. The legislative assembly consists of 55 seats, 45 of which are general, and 8 are reserved for women, technocrats and religious scholars. Of the 45, 12 seats are reserved for refugees from Jammu and Kashmir. In the past, most of these seats were usually usurped by the ruling party in Islamabad, because most refugees live in Punjab and Sindh. For instance, Jammu-1constituency’s voters are spread over Punjab, Sindh, and Balochistan provinces in 48 districts. This segment has little interest in local issues, and votes from provincial viewpoints. Another 8,000 families who migrated after 1990 have been settled near Garhi Dupatta by the Pakistan army. These voters are even more eager to please the powers that be.

A large number of seats are therefore already in the hands of Islamabad including some obvious candidates from 32 registered political parties, like the Tehreek-e-Labbaik, which assisted the deep State in defeating Nawaz Sharif in his home state in the 2018 general elections. It is now contesting elections despite being a proscribed organisation, in a typical sleight of hand of the deep State, with its candidates up for all seats including the refugee constituencies. Then are the mainland parties like the Pakistan Peoples Party and Imran Khan’s Pakistan Tehreek-e-Insaf (PTI), which have huge resources, compared to local parties like the Muslim Conference or the Jamaat-e-Islami, who usually opt to be a small minority in a government dominated by the Pakistani parties. Despite this, it seems that Islamabad still likes to make sure it has the seats. Federal Minister Amin Ali Gandapur who presides over the Ministry of Kashmir Affairs and Gilgit Baltistan, was reported to have paid some PKR 500,000 in cash to his party’s political workers in Mirpur, just weeks before elections. The money was ostensibly to repair a link road. Apparently, the exalted minister takes a deep interest in what should have been the job of local government.

As before, it is widely expected that the ruling PTI will swing the elections. Nonetheless, Prime Minister Imran Khan was in election mode, drawing large crowds. His speeches at Bhimber and Mirpur focussed almost entirely on the corruption of Nawaz Sharif, and how his own government had changed Pakistan from a beggar state to prosperity. The first one might be true, but the World Bank would certainly disagree with the second. Being Imran Khan, he could hardly resist a dig at Prime Minister Modi, but the Kashmir issue was largely mentioned only in passing. Party leaders hardly ever talk of Kashmir during elections in PoK. Benazir Bhutto didn’t, neither did Nawaz Sharif. Nor does Imran Khan now. It seems it’s not quite the soul-searing issue that Islamabad would have everyone believe. Essentially, it doesn’t get votes. That for India is the most interesting thing.

Meanwhile, the sitting ‘Prime Minister’ Raja Farooq Haider has accused Imran Khan and his ministers of ‘direct meddling’ in the elections. He should be careful. Last year, he was nearly charged with ‘treason’ against Pakistan, a charge hastily withdrawn as Rawalpindi realised the effect it would have on an apparently ‘Azad’ territory. And so the charade continues. Pakistani leaders will object to the creation of local bodies in Kashmir, the delimitation process, and upcoming elections, even as their legislative body is reduced to nothing at all. That process needs to be shown to Srinagar’s feisty politicians, the public, and the so-called international community. It’s time the lid was taken off the biggest scam of all.